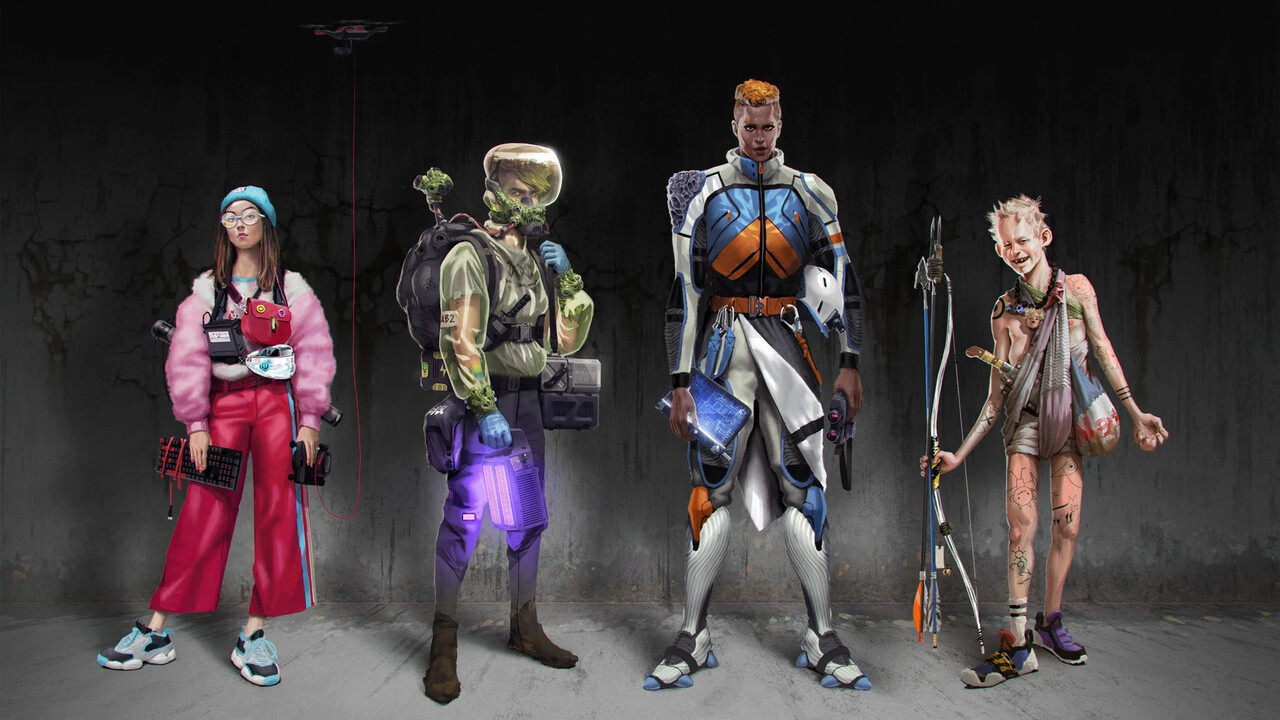 Our last article went through how we created environment concepts for our biopunk narrative art book KIN – Mycocene. Now we move on to character design.

Character designs might have been one of the trickiest—and rewarding nonetheless—parts of the whole process of fleshing out the KIN universe. When it comes to living beings, especially other humans, our brains are unsurprisingly good at analyzing small details we might not even be aware of but keep bugging you until you address the issue. Creating convincing fictional living beings that fit within a made-up world requires a lot of fine-tuning.

First, we have the three protagonists sharing the narration of our story. They are descendants of an international offshore community of scientists based on what used to be called the International Independent Institute of Biology, nicknamed the Raft after the Wi-Flu pandemic. The "Rafters" were all born on this floating last bastion of modern technology roaming the Pacific ocean.

We began with Rain, a microbiologist and biochemist in his thirties. Rain starts as an observer within the KIN universe, a scientific mind interested in the evolutionary path taken by Life on Earth. He prefers the silence of the bottom of the ocean to the Raft's crowded quarters. Rain spends most of his time running tests and biohacking experiments in one of the platform's numerous laboratories.

Each character design process began with creating a rather precise brief with reference pictures, indications, and simple sketches based on our world-building and the story's needs. When working as a team, briefs are essential to establish common grounds between members and minimize irrelevant work. 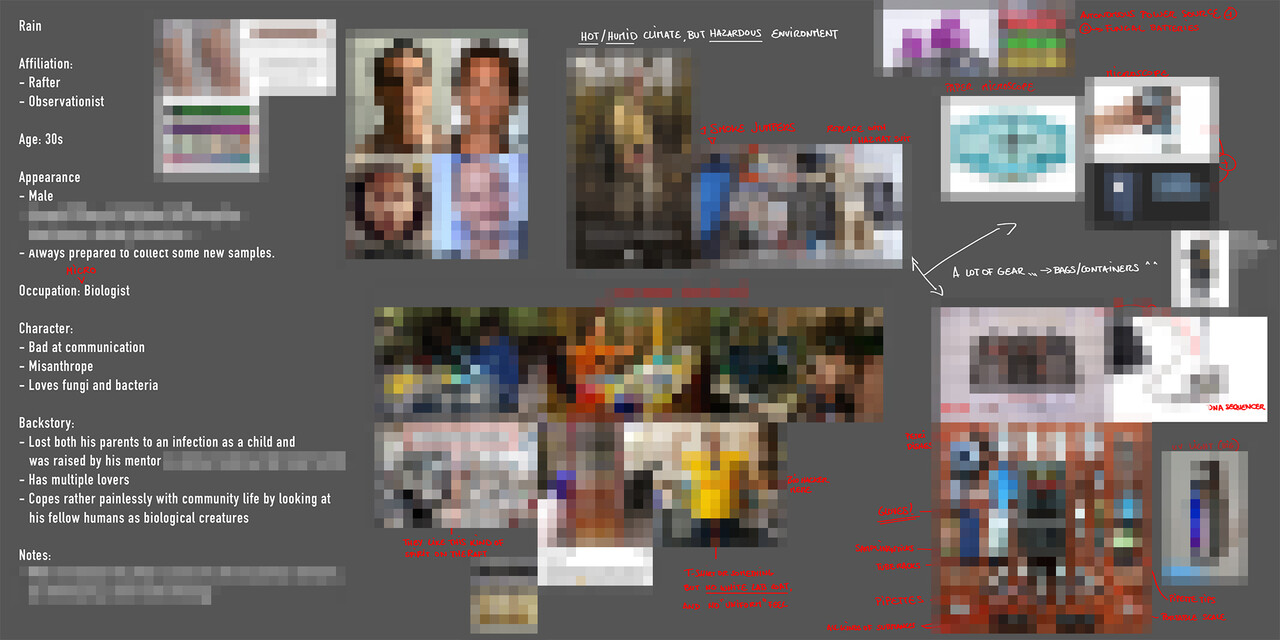 Pierre Lazarevic was the main person in charge of designing characters. While working on KIN, we always started by sketching out different poses with varying silhouettes and equipment to explore a wide range of possible interpretations. 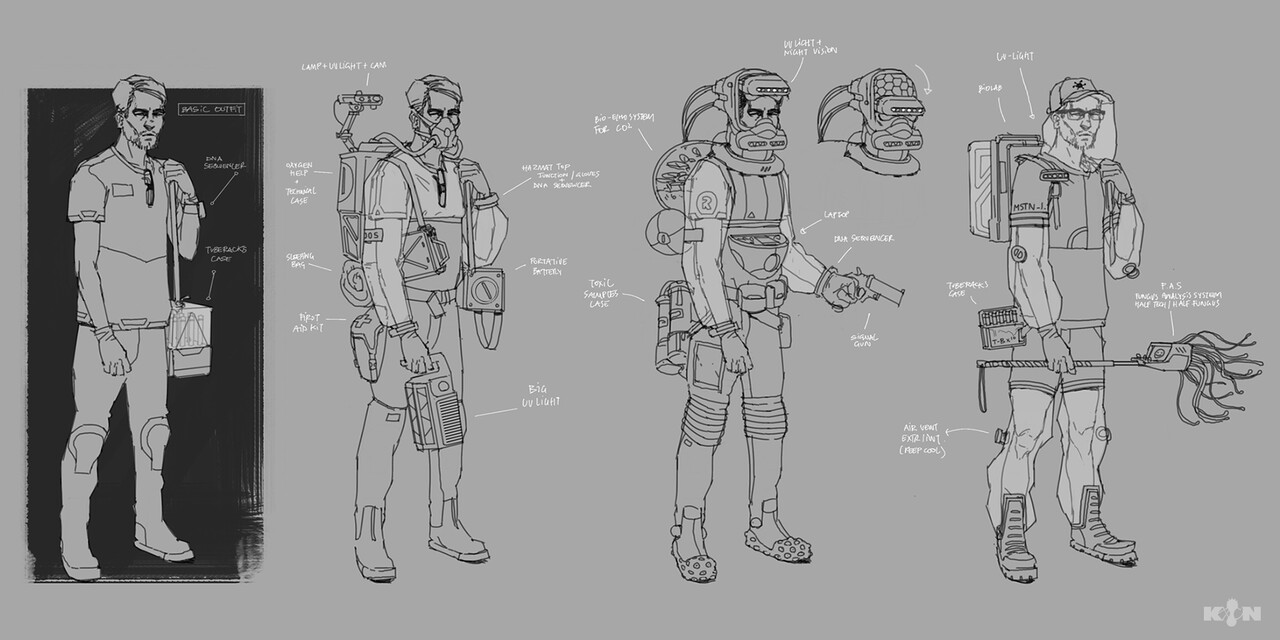 With continuous feedback from the rest of the team, we refined the more realistically scientific-looking iteration by changing its somewhat angular design with more organic-looking shapes in a detailed line-art version. We kept adjusting elements with successive drawings—the organic-looking joints and air sampler, the sturdy battery pack, the portable laboratory box with its storage unit, the algae-generated oxygen breather—gradually achieving a more precise front and back concept. 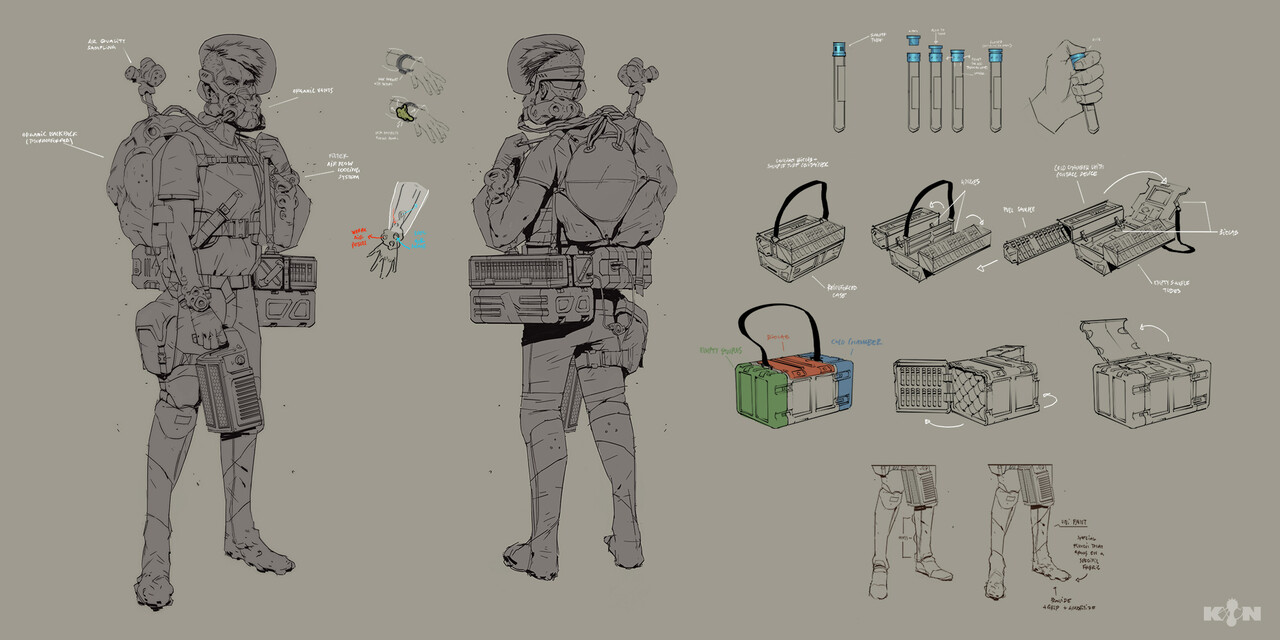 Moving on to the colored version was yet another challenge as we tried to establish an artistic direction for KIN's character designs. The first few color schemes felt a little too clean, and we adjusted Rain's color palette to fit the DIY and messier feel we thought was essential to the universe. 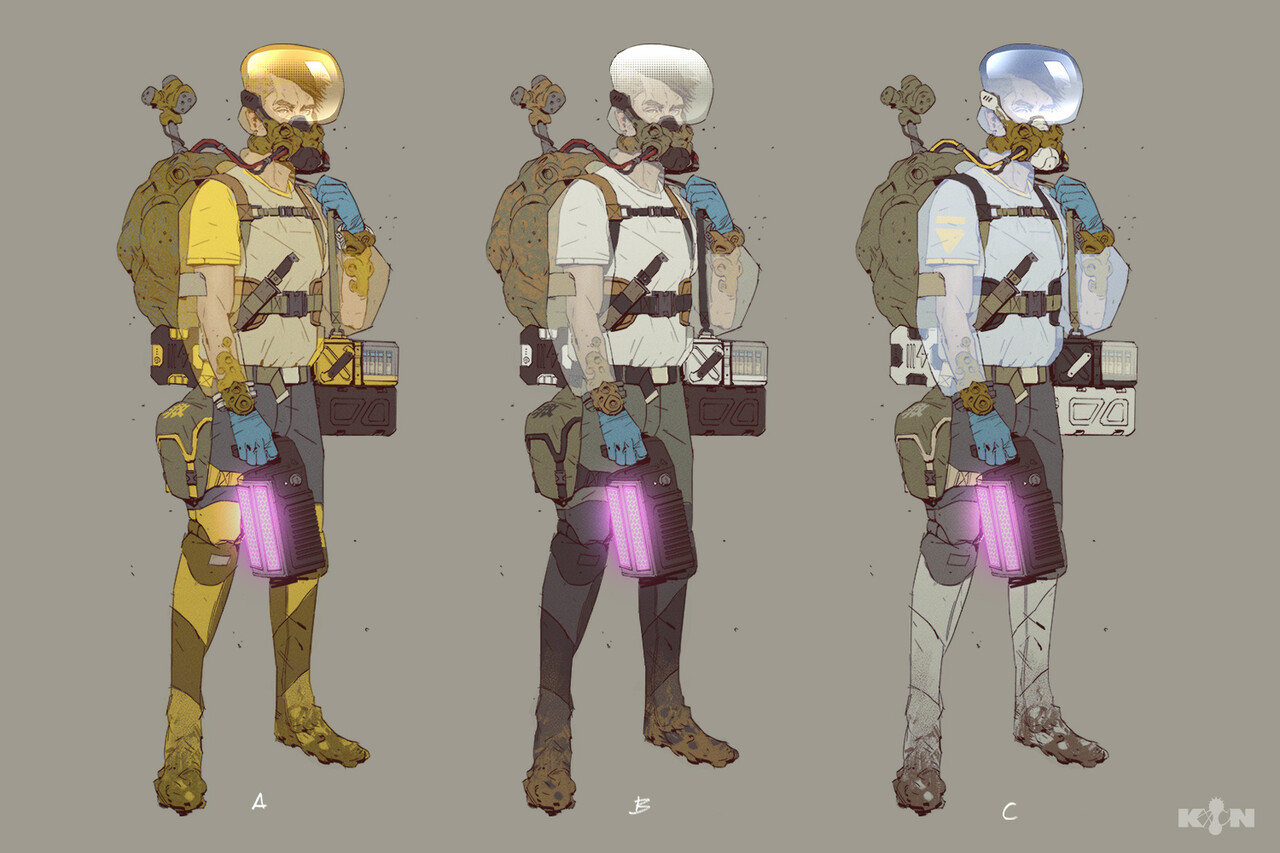 It took us quite some time to find the right render for Rain's concept. Pierre ended up taking inspiration from Richard Lyons's linework combining thin straight pen strokes with thicker ones to suggest volumes. And we adapted it to fit our environment concepts with photobashed textures and an overpaint final pass. 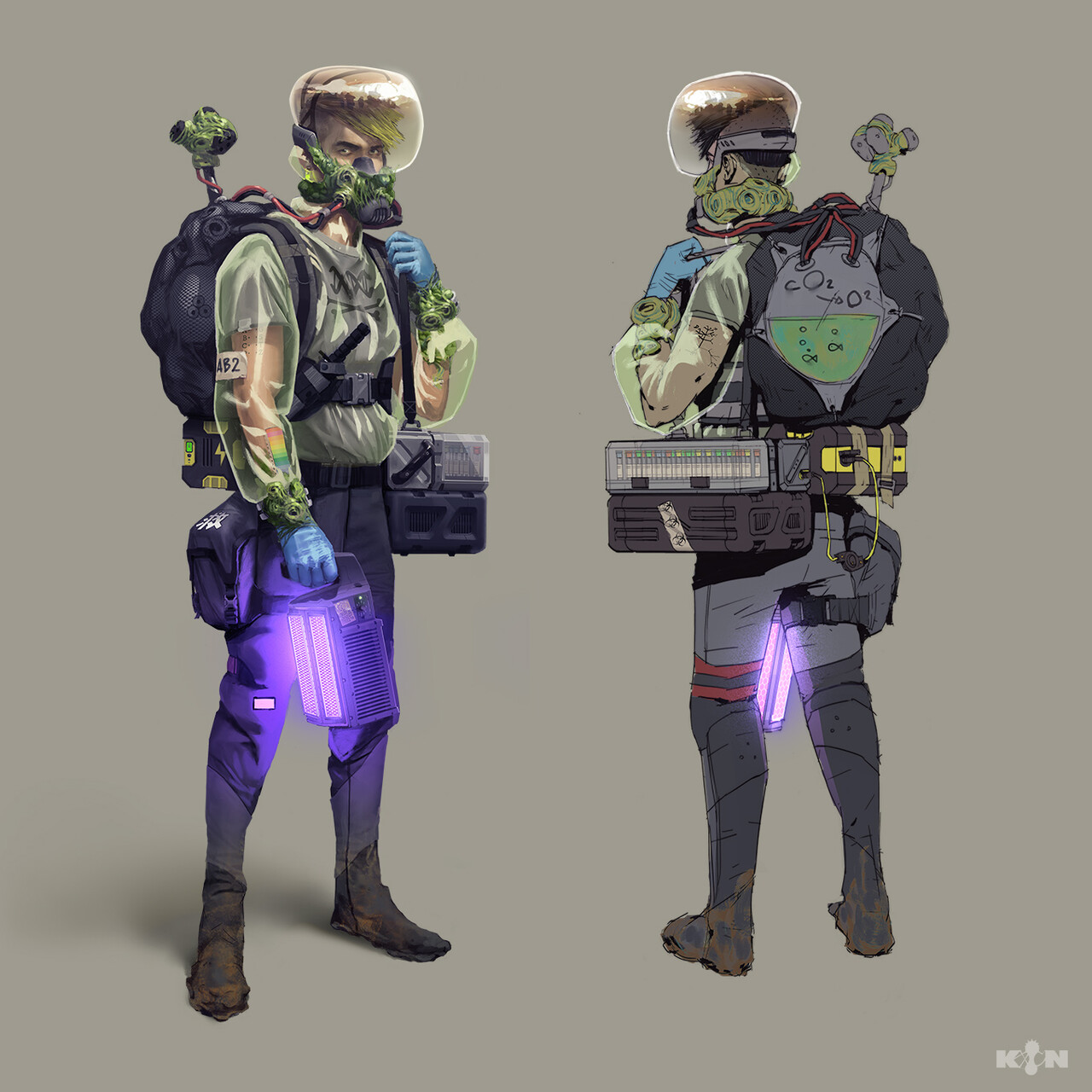 We continued with Elle, a computer engineer and archivist in her twenties. Elle is a practical spirit, proponent of the idea that Rafters should intervene to restore the pre-pandemic society she's fascinated with. She leads her life in contradiction with the Raft's communal lifestyle. Elle nevertheless keeps a close circle of like-minded friends, including her spouse—an anachronism in the ocean-borne community.

We had a lot of fun design her. We followed the workflow established while working on Rain, starting with our brief and pose sketches inspired by fashion models to anchor her nostalgia for all twenty-first century-related things. 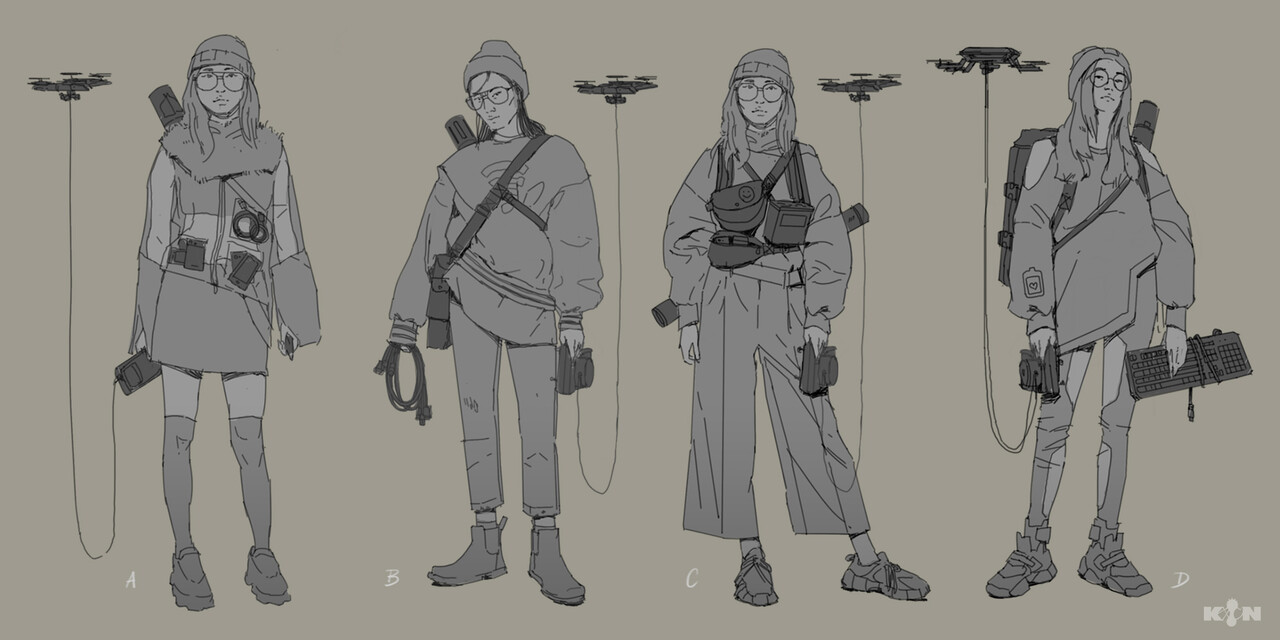 During the detailing phase, we took some extra time to work on her DIY tech equipment made of an eclectic mix of antique—seen from a 2160s perspective—computer and smartphone parts. Designing power-related elements like her portable wind turbine and the organic solar panel on her backpack was also a great way to further our thinking on renewable energies in the KIN universe. 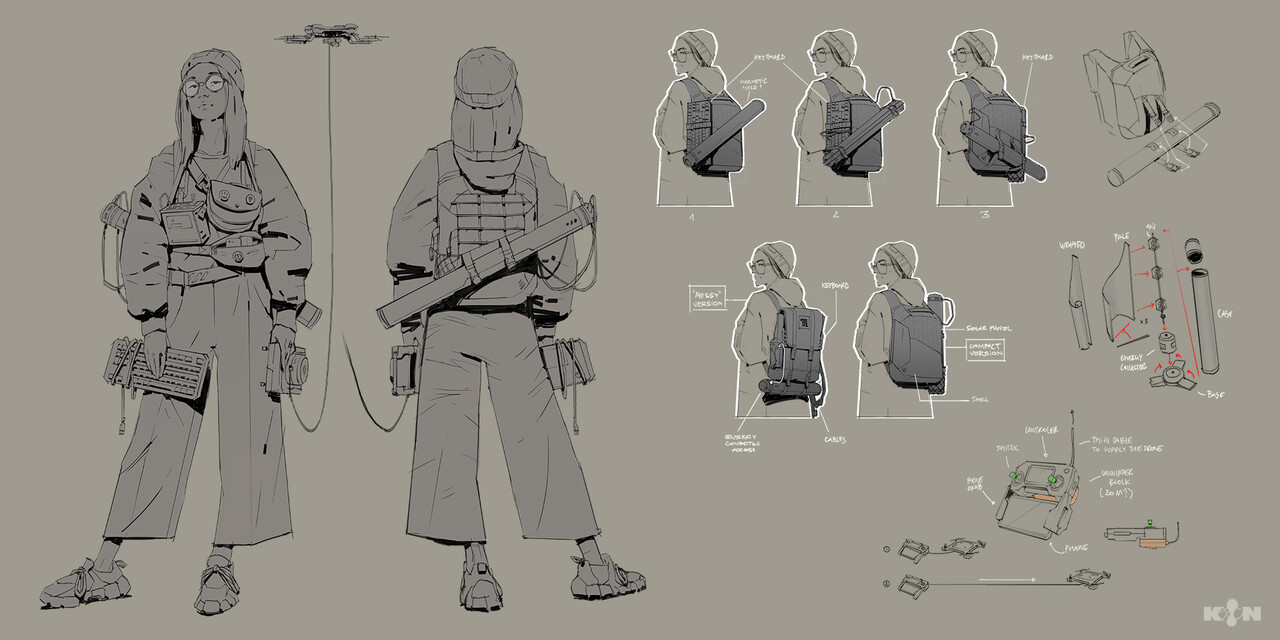 At this stage, we found out that creating face portraits for each of our protagonists was an excellent way to explore their emotional side and develop deeper connections with our characters within the team.

Color-wise, we settled on a red-based analogous color scheme—with a touch of complementary blue—that we found best expresses her forceful and independent personality. 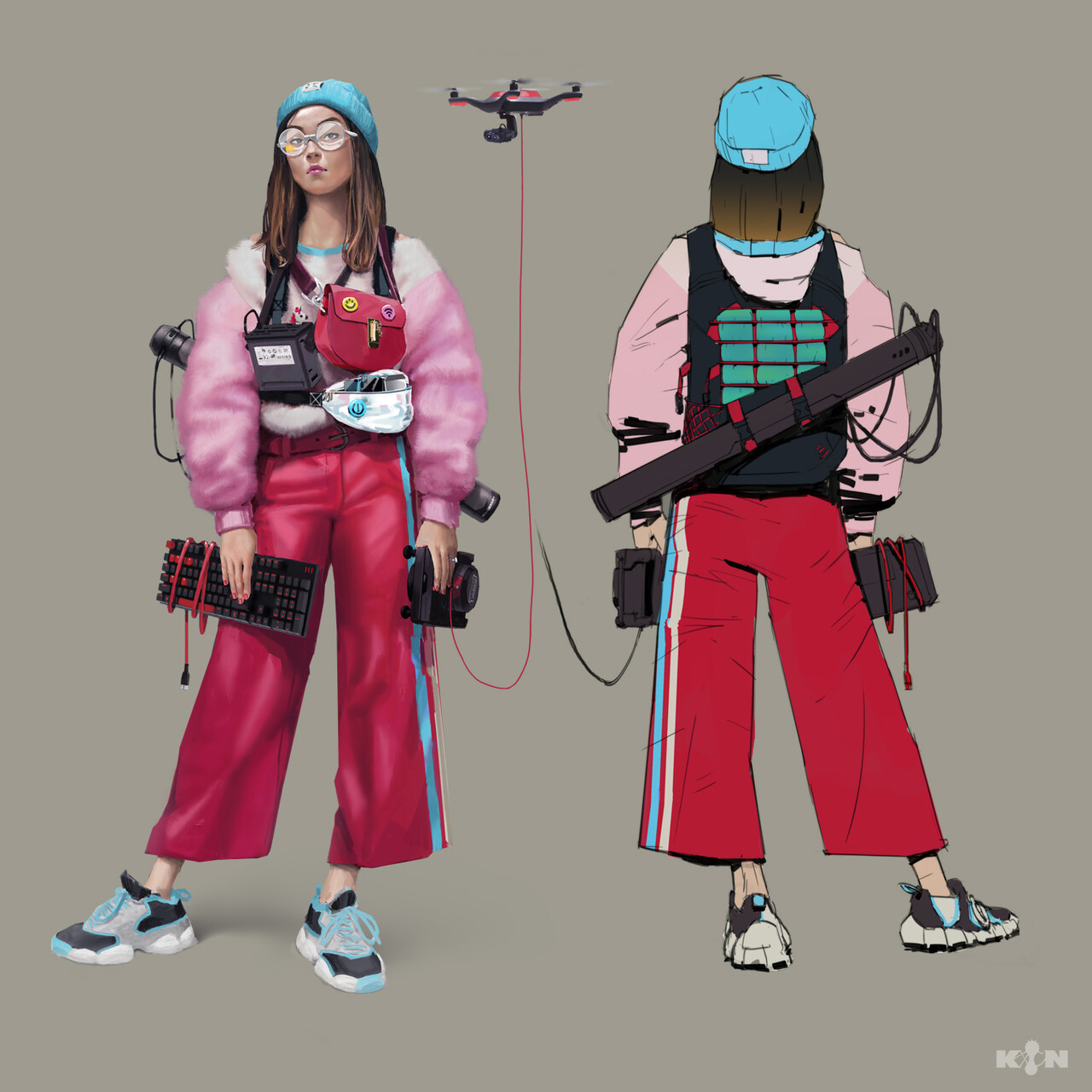 We then moved on to Nao, a crew member in her forties dedicated to piloting the Raft and maintaining its integrity. She and her fellow pilots share a particular engineered genetic makeup updated over generations that improve both mental and physical abilities to ensure their role as stewards of humanity's last bastion. As such, Nao inclines toward more widespread genetic alterations of future human generations to adapt to their new world.

We started our explorations with pose sketches focusing on her dignified presence, muscular build, and uniform-like apparel, contrasting with the two previous more informal looks. 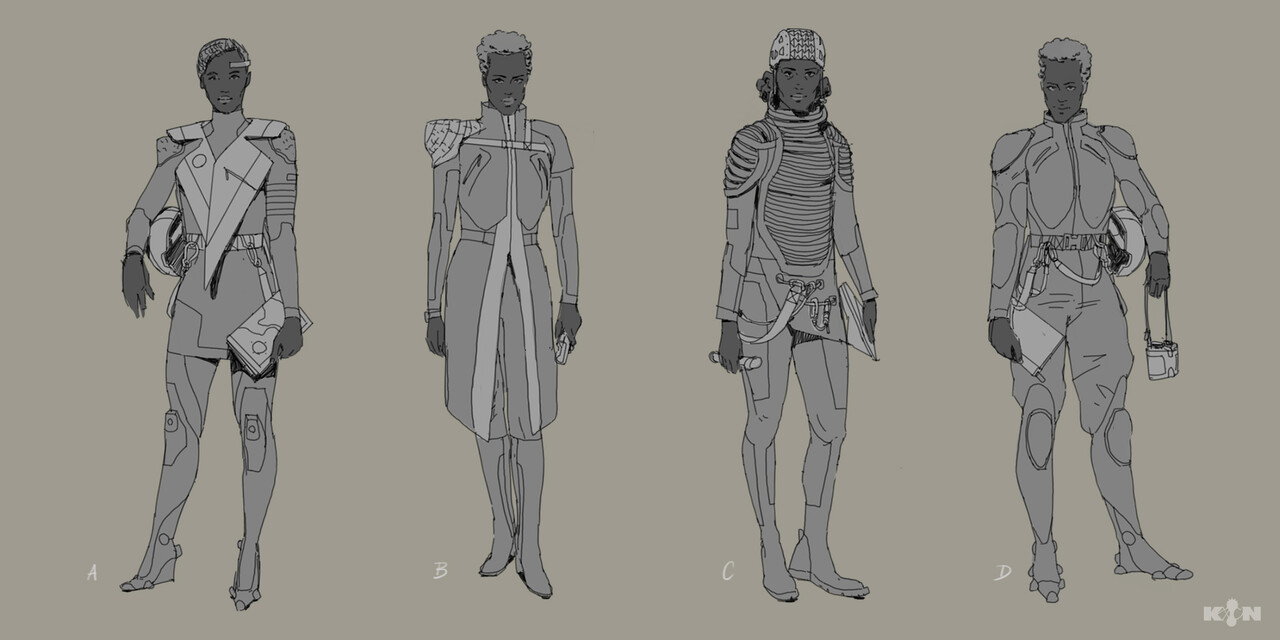 Our subsequent work primarily focused on the biology-inspired design and materials of her suit in the detailing stage. We grabbed inspiration from selecting actual research projects led by designers such as Neri Oxman (2). We also looked at the art of drawing masters like Moebius, whose entire body of work abounds with organic lines and shapes.

With microbe-loving Rain in green hues and hot-tempered Elle in the reds, choosing blue for Nao was almost a no-brainer. And it fits with the usual traits of intelligence, loyalty, and stability attributed to the color. 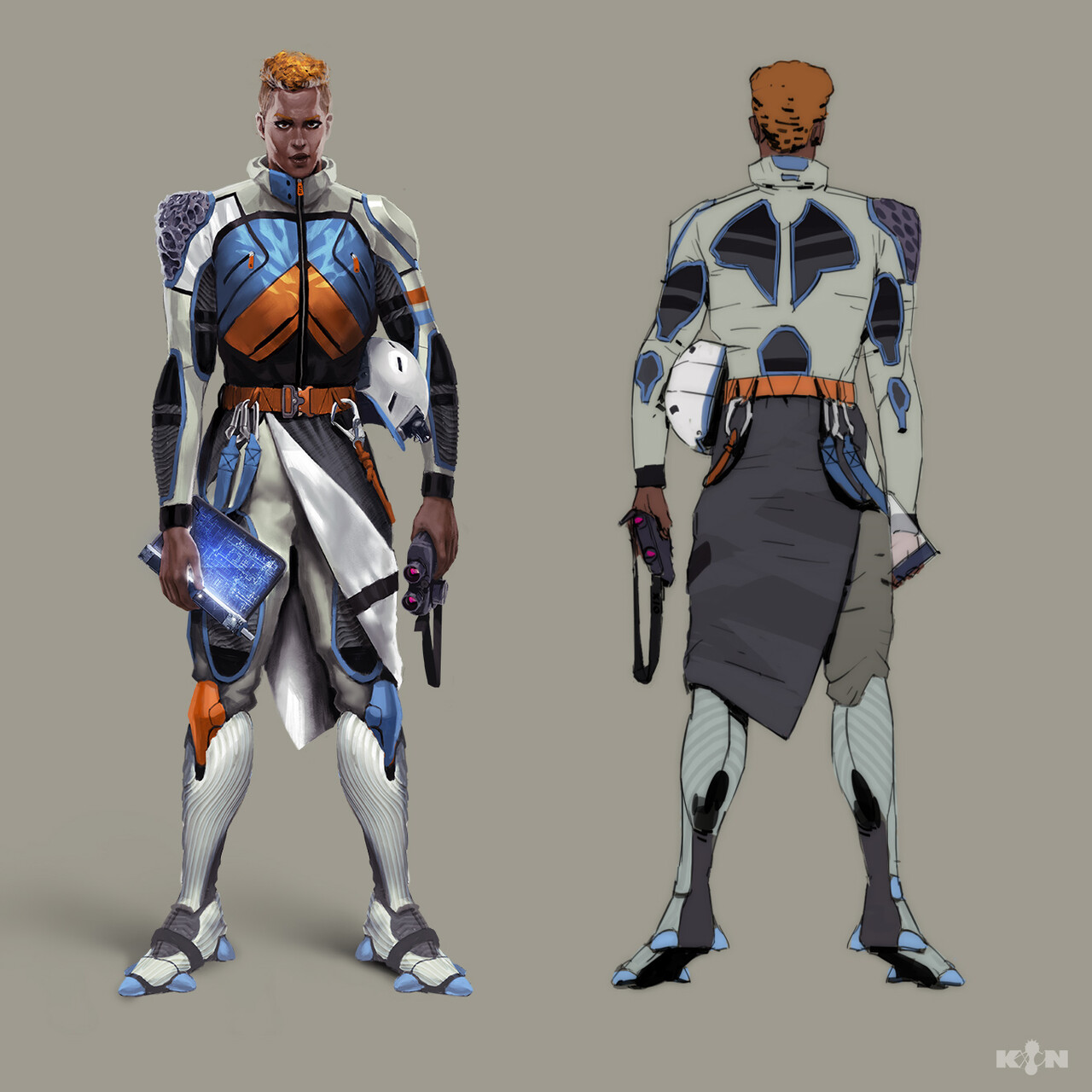 We also took some time to design one of the Rafters' living creations, representing the forefront of their biotechnology research. Mirror dogs are mule-sized synthetic organisms immune to all natural viruses and pathogens (1). Rafters designed them to transport expedition equipment in highly pathogenic terrestrial environments. While their hairless photosynthetic skin covers a fair amount of their daily energy needs, a regular dose of artificial nutrients produced by an engineered strain of cyanobacteria must complement their diet.

Having a set workflow doesn't mean you can't try new things from time to time. Given the challenge of designing these huge dogs, Pierre turned to 3D after a quick round of photobash sketches to sculpt the muscular silhouette in Zbrush, build the harness structure in Medium, and kitbash its load in Blender. 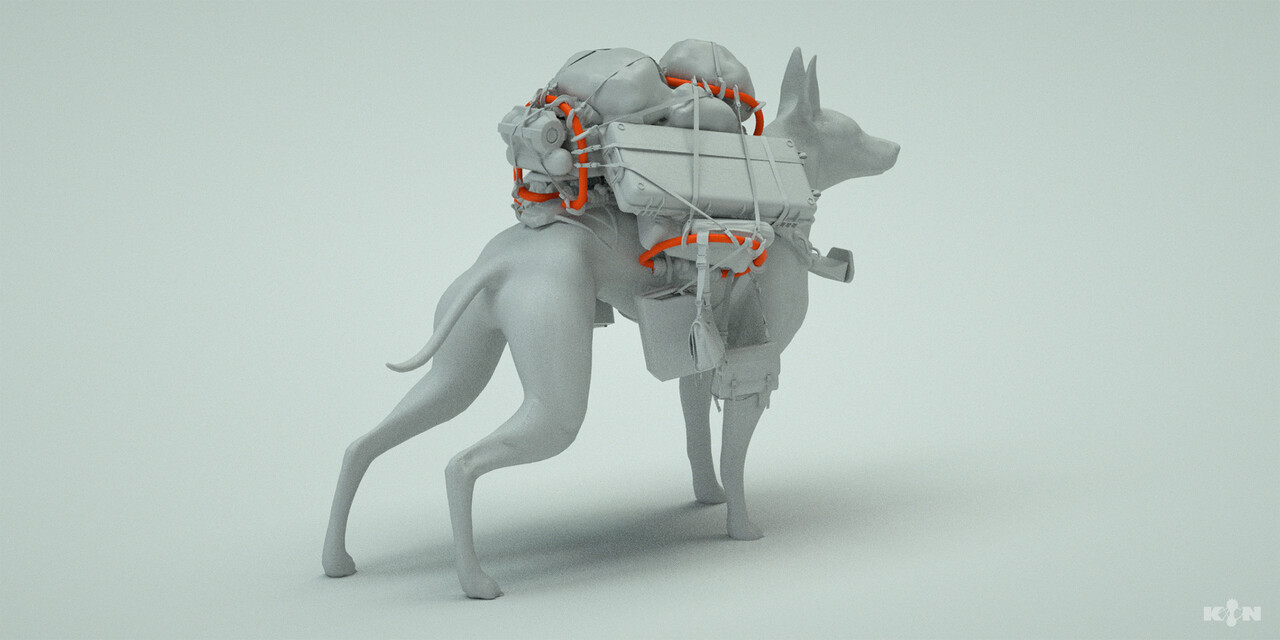 The final render was painted over in Photoshop to render the mirror dog's unique skin properties and add more detail to the design. 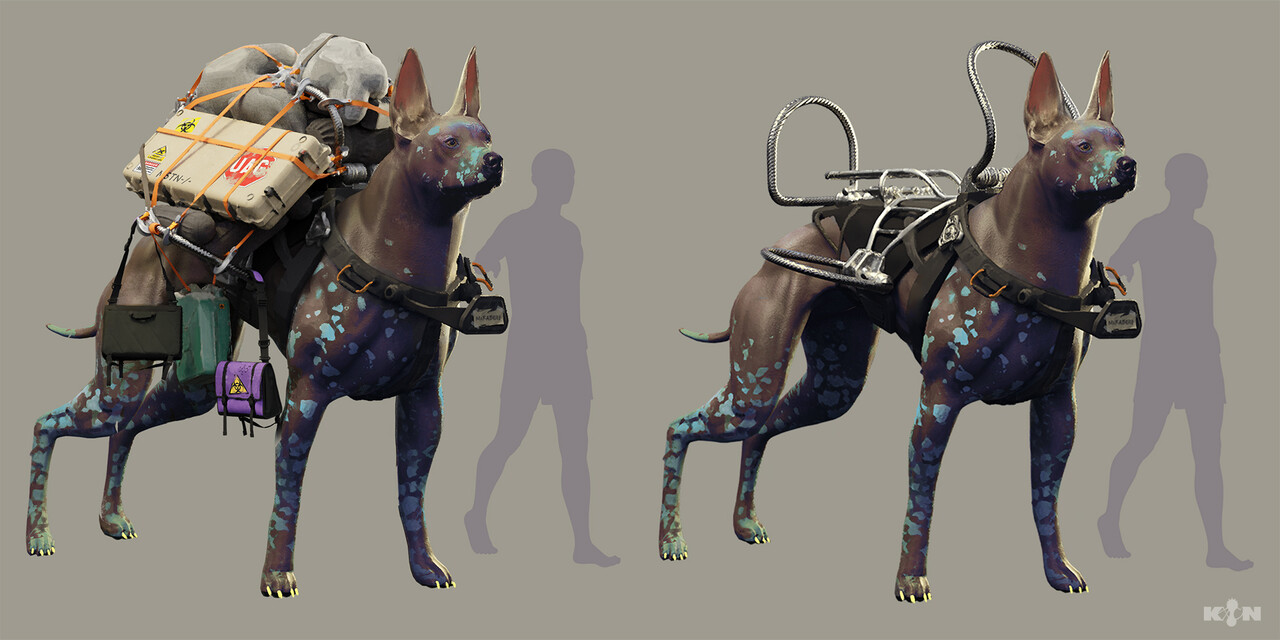 Once we had a rather precise image of our three Rafters—and their animal companion, we started designing the other human beings our characters would encounter along their journey. These people are survivors of a whole different sort. Their ancestors were some of the very few who managed to pull through the Wi-Flu pandemic and had to adopt various strategies to adapt to a mutating world.

One of them is Kykoo, a young hunter-gatherer in his late teens. Kykoo is from a precarious family community with no other choice but to rely on inbreeding and the genetic inputs of rare outsiders to perpetuate their line. Despite its numerous drawbacks, this has helped maintain rare physiological adaptations crucial to their survival. And it doesn't prevent Kykoo from being a cheerful character with a deep connection to surrounding life.

We returned to our regular character design routine for Kykoo. After just a few tries, we found the right mix of posing, expression, and unbalanced anatomical features to convey his congenital baggage—varying arm and leg lengths, additional and missing digits, the prominent ribcage—while giving him a sense of welcoming openness. 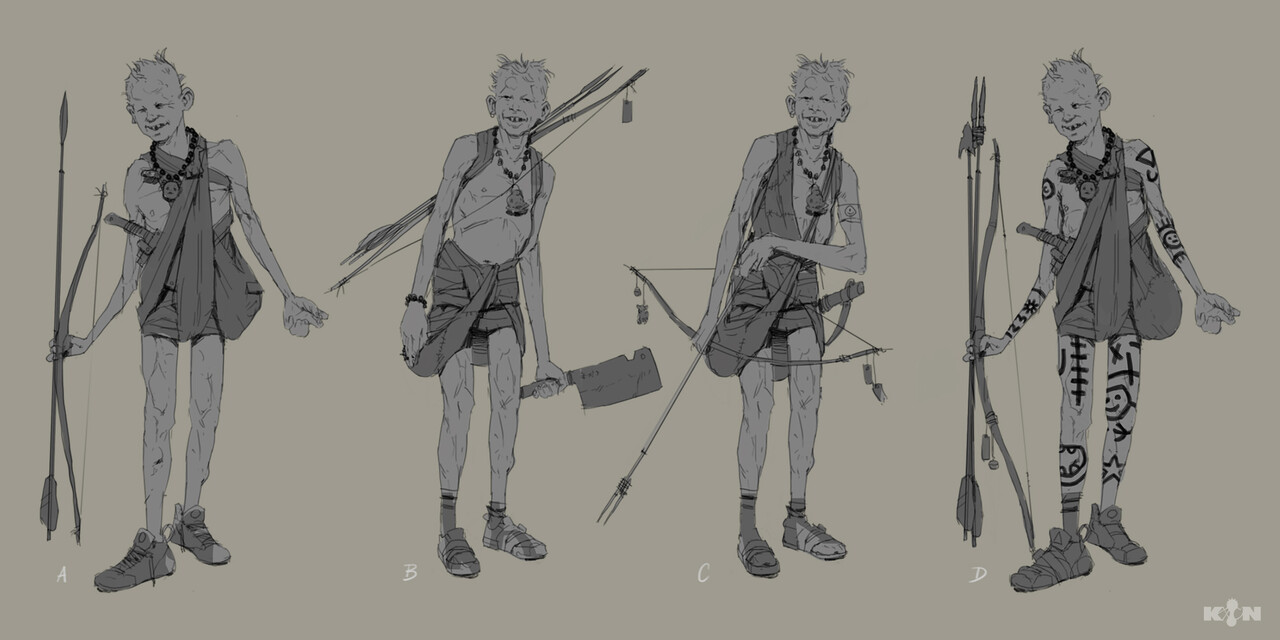 We designed his gear with a life of scavenging the remnants of industrial civilization in mind. Some of his more precious attire elements have probably been handed down generation after generation. His naive tattoos also help materialize his deep care for his family and particular creatures. 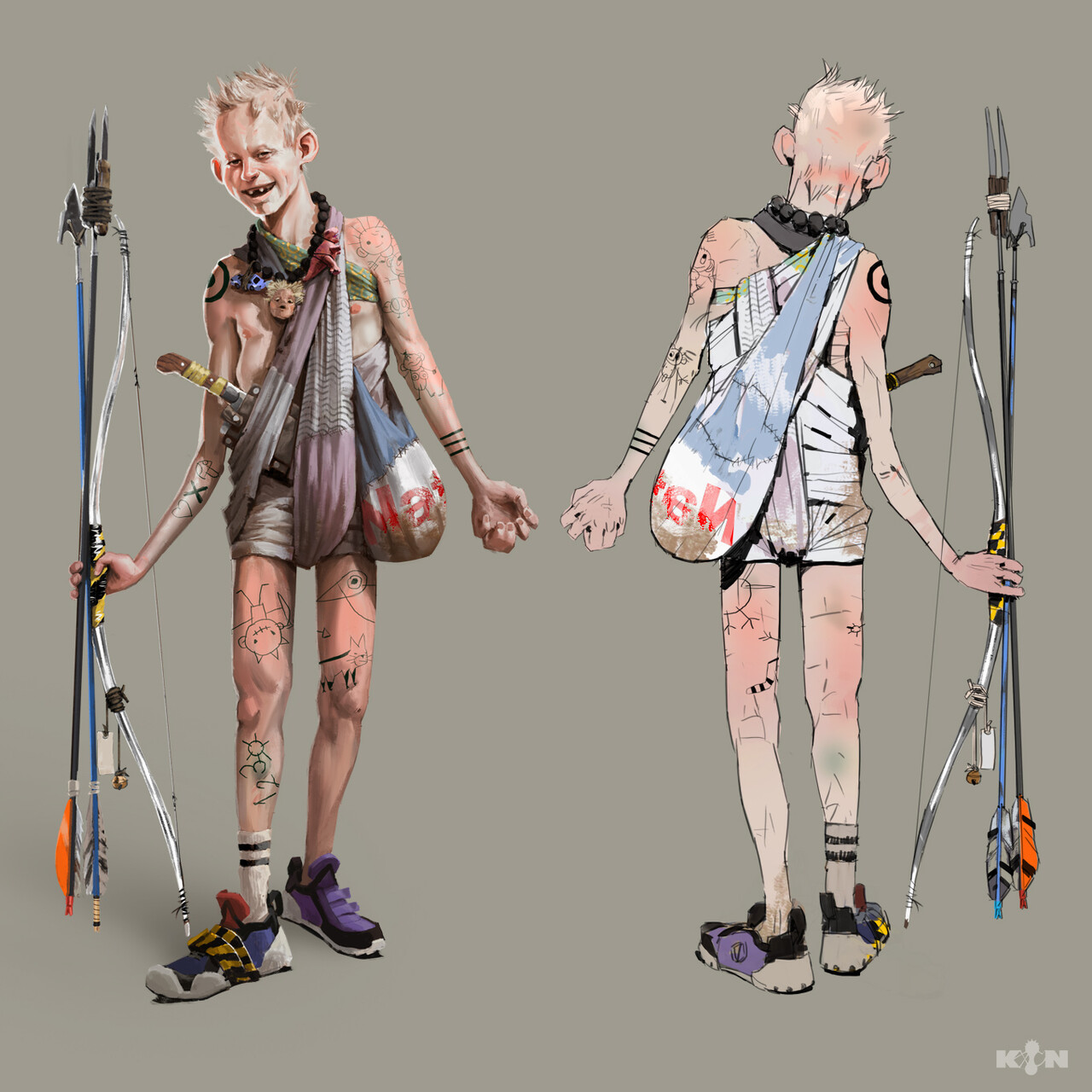 We concluded our character design marathon with the White Sisters, a group of parthenogenesis-capable, underground dwelling, mushroom farmers and low-tech biochemists. They all share the same altered genome inherited from a single ancestor a century ago and use epigenetics to adapt their morphologies to the community's three clearly defined social roles. White Sisters primarily rely on their enhanced olfactory and exocrine systems to communicate and monitor their environments.

Our first round of sketches led us too close to the image of "termite women," the original idea for the white sisters, and ended up being a little too cartoony when lined up with the rest of our concepts. 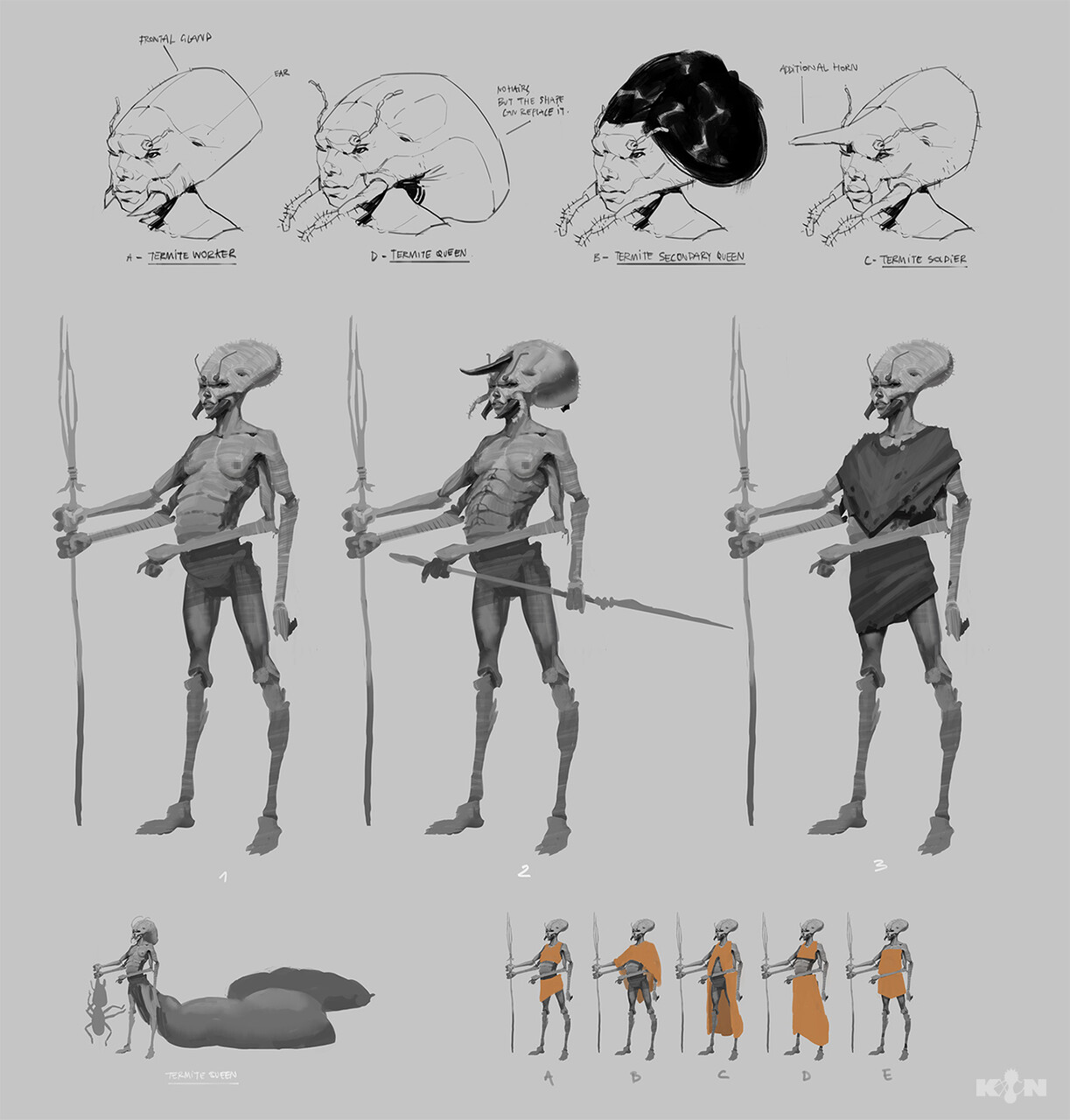 We reworked our brief, and our second try shows their altered and unsettling anatomy working in a more "realistic" and structured way, contrasting with Kykoo's deformed body plan. We translated the white sisters' acute sense of smell by enlarging their nasal features and pushing their eyes to the sides. Their capacity to produce information-bearing hormones is shown with protruding glands and additional organs on their abdomens. We completed their design by varying sizes, muscular masses, and gland sizes to create the three casts their society is composed of. 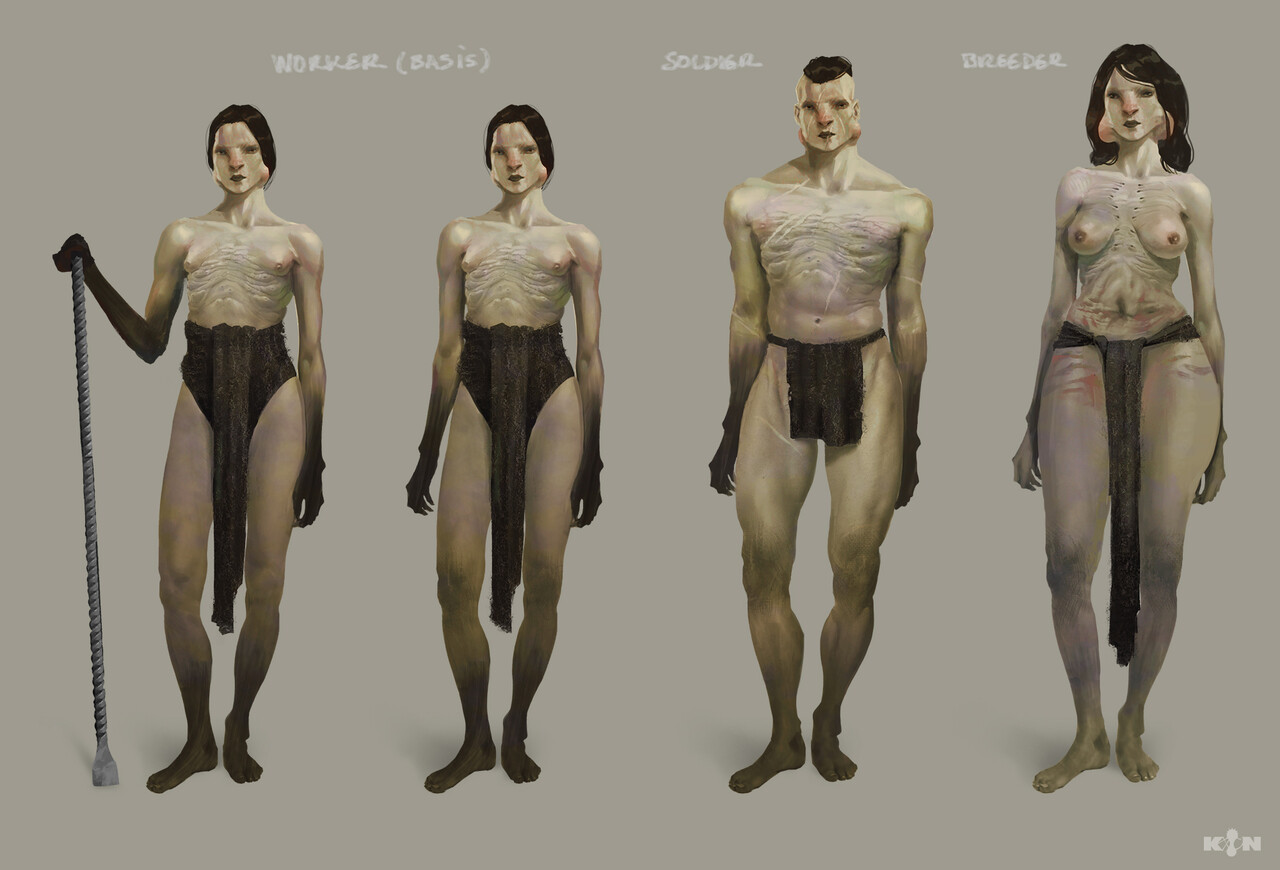 There is still a lot we would like to tell you about the inhabitants of the KIN universe, and you will get to know more when you get the chance to read the story. But we hope this foray into our character design process gives you a better understanding of the breadth of human traits and synthetic biology elements we felt deserved to be present in the biopunk setting of KIN – Mycocene.

(1) The first chapter of George Church's book Regenesis gives an excellent introduction to the concepts of molecular chirality and its potential for the development of mirror life forms.