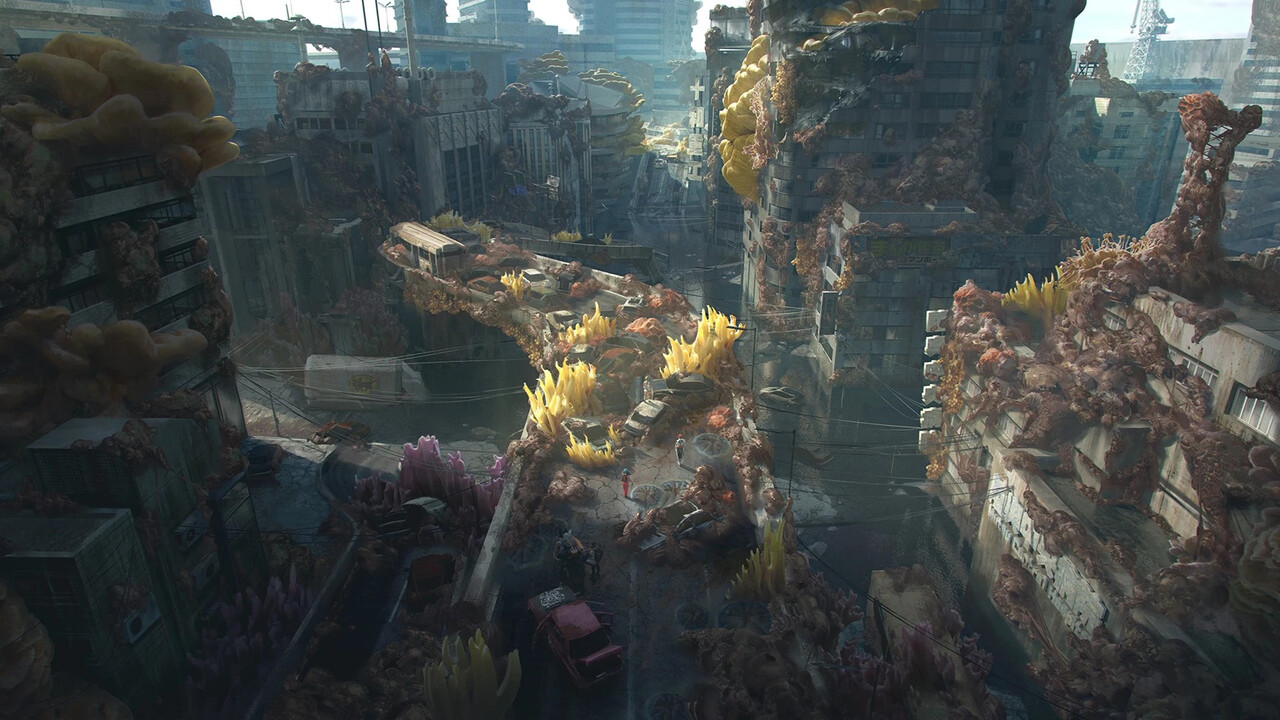 In the previous three articles, we’ve gone through the processes of our choice of medium, world-building, and story design for KIN – Mycocene. It is now time to delve into more visual stuff, starting with environment design.

Concept art has always been at the very core of our idea to create a new universe. Over the years, all team members have worked either as or with concept artists on projects like films, games, and books. Concept art is here to convert intangible ideas into shapes, forms, and colors that convey meaning. These images usually serve as guides for other creators to craft sets and props, virtual locations and characters, or in our case, illustrations.

Creating the Visual Language of a “Rotten Planet”

Here is what we knew from our world-building:

With this information in mind, we looked for every reference material we could think of: Japanese brutalist architecture, abandoned cities, natural disasters, biotechnology equipment, fungi, bacteria, their environments...

Reference boards in hand, we wanted first to get a more precise impression of what our world would look like in general. We began by choosing a random sunken coastal city covered in a thick layer of fungi. With Klaus Pillon’s expertise, this first concept would help us tackle workflow, design, and art style issues early on. 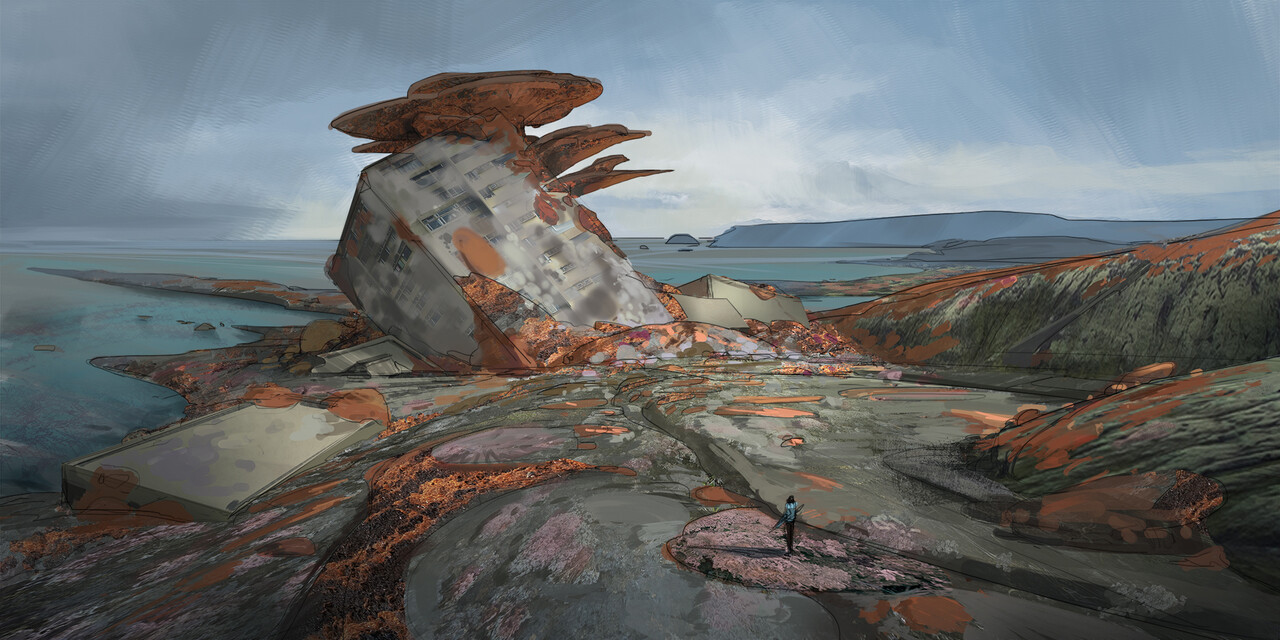 Exploratory sketch for the Shore

After a few exploratory rough sketches, we switched to VR and used Medium to build the foundations of this first image. We found that this was the perfect tool to create convincing organic blocks but not the best for quickly modeling hard surface architectures. Fortunately, our city was supposed to have been gnawed at by fungi for a hundred years. We thus decided to stuck with it for this scene. 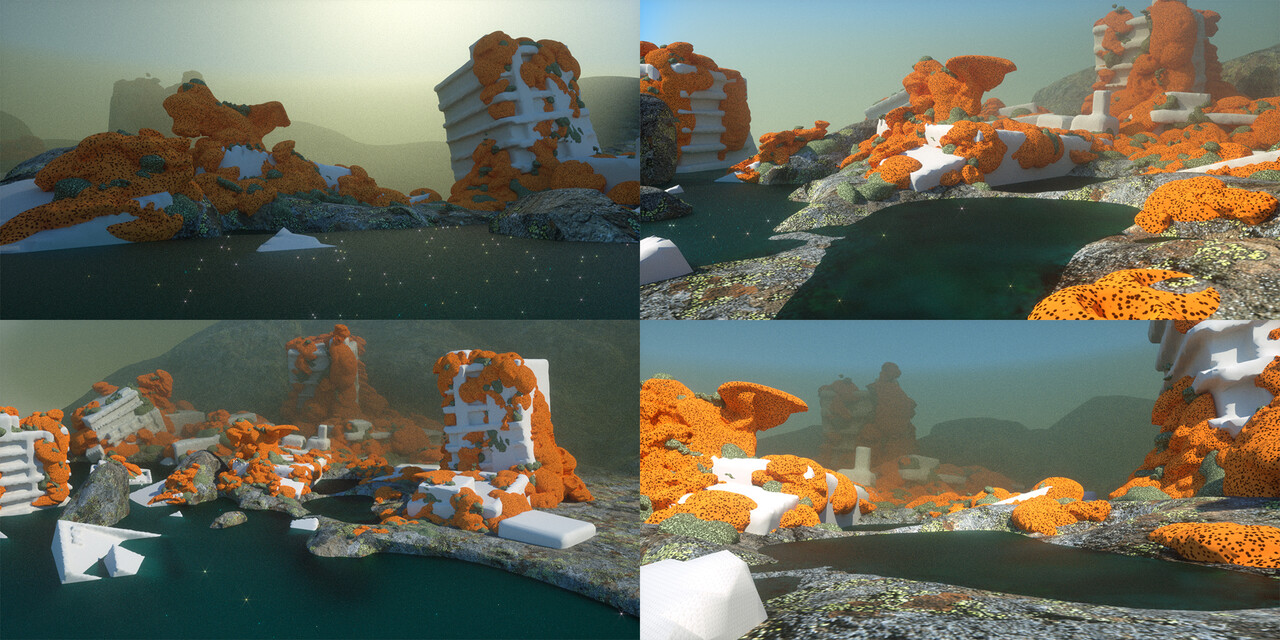 After settling on the composition and rendering in Octane, we obviously were going to paint loads of mushrooms. But we also wanted our environments to be somewhat reality-based and look strange and alien at the same time. So we picked up the fungi from the references we thought fitted the brief and created a library of precut shapes that we could use and reuse in our concepts.

Moving on to 2D work in Photoshop, we found the main design challenge was striking the right balance between the mix of shapes and textures at different scales to render an interesting and coherent whole on the canvas. Setting a dominant color to the organic elements helped unify areas, working with complementary colors to add detail. For this, we used a preliminary color palette inspired by photo references of mushrooms.

Process steps for the Shore concept design by Klaus Pillon

In the final painting phase, we had to adjust the levels of detail between 3D and photobash elements to improve the image’s readability. Working on edges proved to be particularly efficient. It brought better contrast and transitions between the different types of fungi, reinforcing the impression of a teeming interconnected web of life we wanted to create.

After we completed the Shore image, we used it as a benchmark and continued exploring the design grammar of the KIN universe by creating simple value sketches. 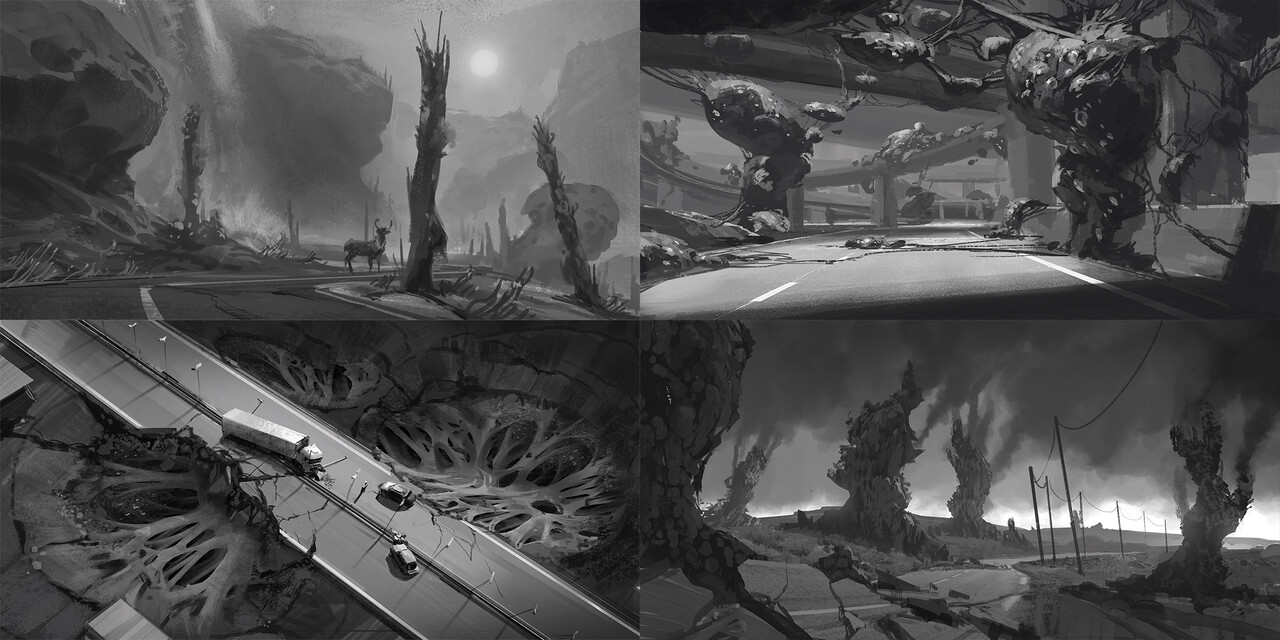 As we tried various combinations of fungi and artificial structures, we became convinced that reducing the conventional mushroom shape—with the stem and cap—to a minimum was the right thing to do if we wanted our world to differentiate itself from the pre-existing imagery.

This work helped us expand on what we acquired with the first concept and consolidate it into a graphical grammar of sorts.

The Raft is the ocean-borne biotechnology research facility where our protagonists start their journey. It is the last remnant of the fallen human civilization, a place of survival made possible by recreating the infrastructures necessary to modern society on a micro-scale. Creating this concept was an excellent place to start defining our story’s architectural and technological side. 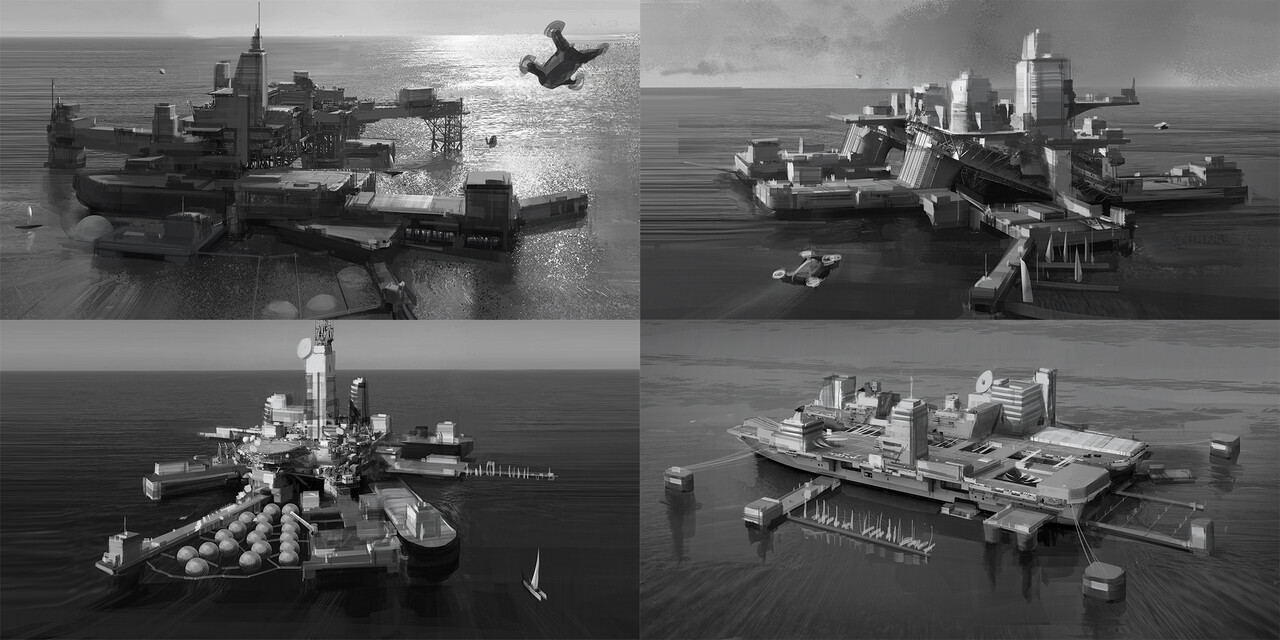 Rough sketches for the Raft

We took inspiration from semisubmersible heavy-lift ships used to transport offshore facilities and other vessels (1) for the Raft’s primary structure. We topped it with constructions hinting at the various functions required for their autonomous survival, inspired by recent trends and speculations in off-ground cultivation and seasteading projects.

After executing a series of black and white sketches to fix a direction and work out the Raft's emergency defense mechanism, we modeled the 3D basis for this mostly hard-surfaced concept in Blender. We used Jama Jurabaev’s s displacement maps (2), which proved to be a great way to generate details quickly, even at large scales. We incorporated an updated mix of industrial and angular architecture by adding additional information and aging effects using photobash and overpaint techniques in Photoshop.

Process steps for the Raft concept design by Klaus Pillon

Adding to the hard edges and overall technological feel, we used the prominent color red to echo the color-coding of danger areas in industrial facilities. Red biotechnology also happens to be the field dealing with “techniques such as gene therapy (...), stem cell research (...), genetic engineering (...) and the development of new drugs and vaccines” (3), a perfect match for the activities we imagined Rafters carried on board.

We continued the design of KIN’s environments with Hokuto. Our backstory mentions the relocation of the capital city after the creation of the North-East Asia Archipelago Federation (NEAAF)  from the submerged Tokyo metropolitan area to the northern island of Hokkaido. Fallen during the Wi-Flu pandemic, the new and rapidly built metropolis protected by a massive sea wall was just the right place to mix the organic trends set in the Shore concept with the artificial one developed with the Raft. 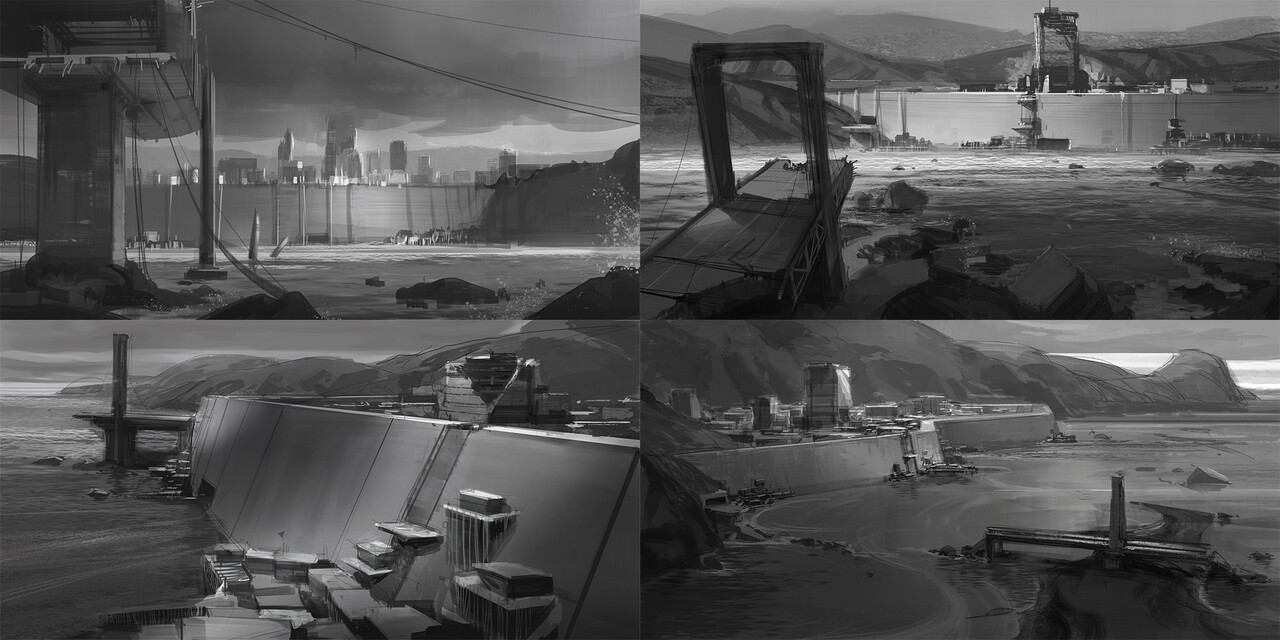 At this point, we had our workflow more or less in place. We proceeded by first drawing preparatory sketches, then moving into Blender to create a 3D basis that is exported to Photoshop, where we can add photobash elements and finalize the concept by painting.

For this Hokuto concept, we used Kitbash 3D assets (4) for the bulk of the buildings and focused on including design elements to hint at the events leading to the city’s fall during the pandemic. 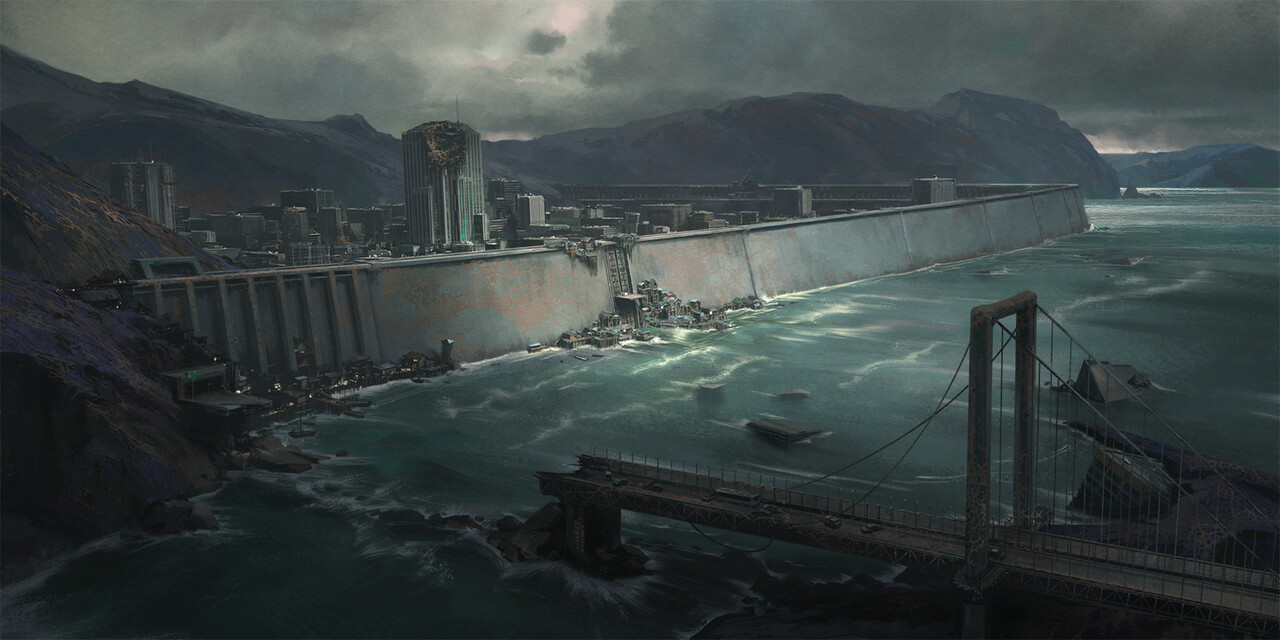 Later on in the project, this image was also a good reminder that concept art isn’t set in stone and that one should not fear modifying and adapting the designs to serve the evolving needs of the story. As you will see in the art book, we changed several elements in the final illustrations.

These are two more concepts for key environments in the KIN universe. Like the others, they played an essential part in refining the backstory and lore of the world. 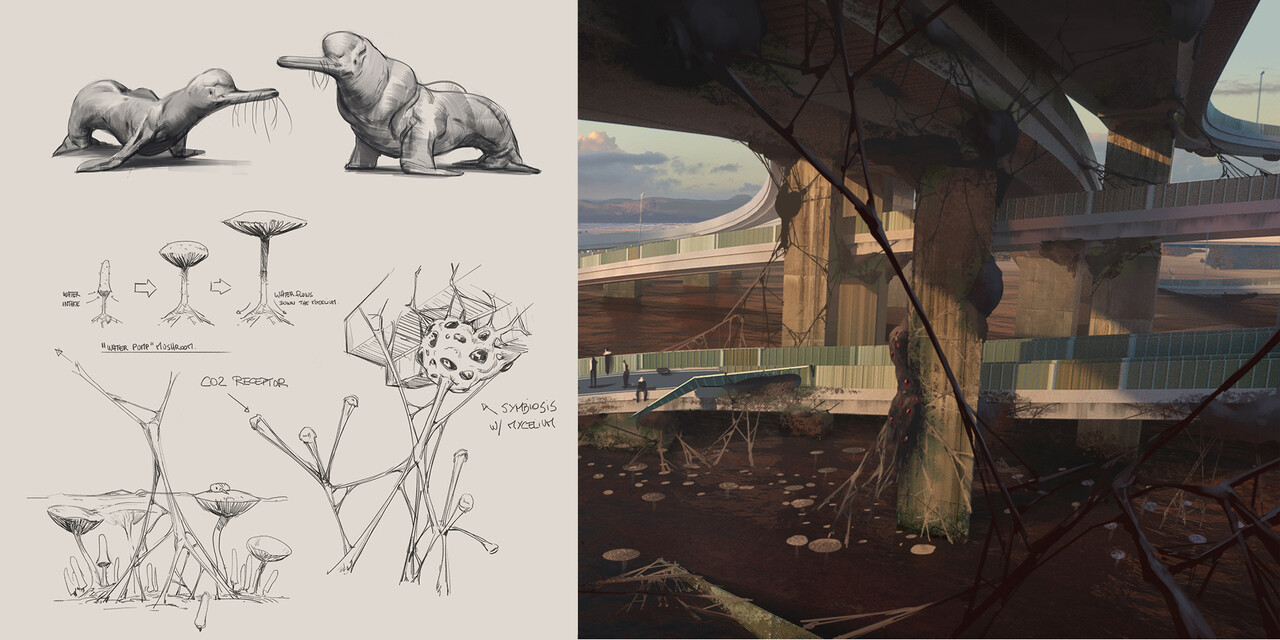 Various sketches for the Junction concept

With the Junction, we further developed our graphical treatment of fungi and their mycelium. It is also an example of a particular ecosystem we built, considering the few people, rare animals, and their interaction with the fungal environment undergoing constant evolution. 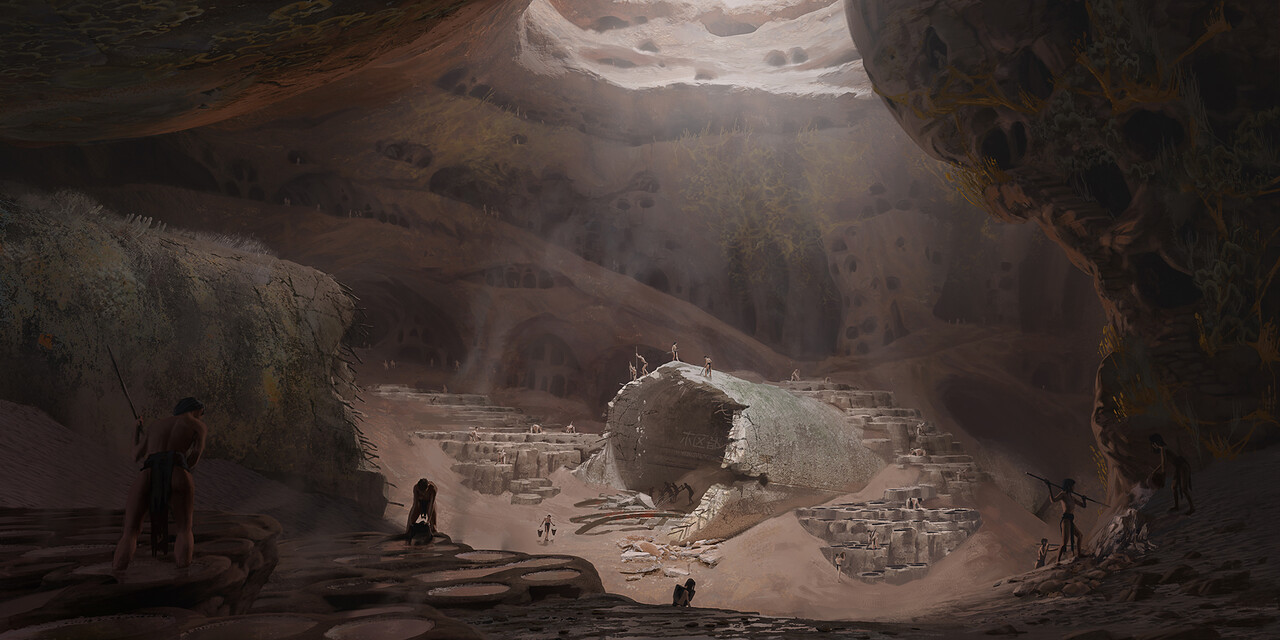 The Mound concept by Pierre Lazarevic

This design of the Mound results from our reflections on the kind of low-tech, biomimetic, post-collapse architecture that could make the lives of future humans adapting to this unfamiliar world possible. Inspired by termite colonies, we had a lot of fun digging through a virtual lump of earth in Medium in the process.

As we mentioned before, the environment of KIN – Mycocene is not just a mere background for its characters. We think of it as central to our story’s development. We hope these few lines give you a glimpse into the thoughts, tools, and processes that made its design possible.

(2) How to create cinematic cityscapes, Gumroad