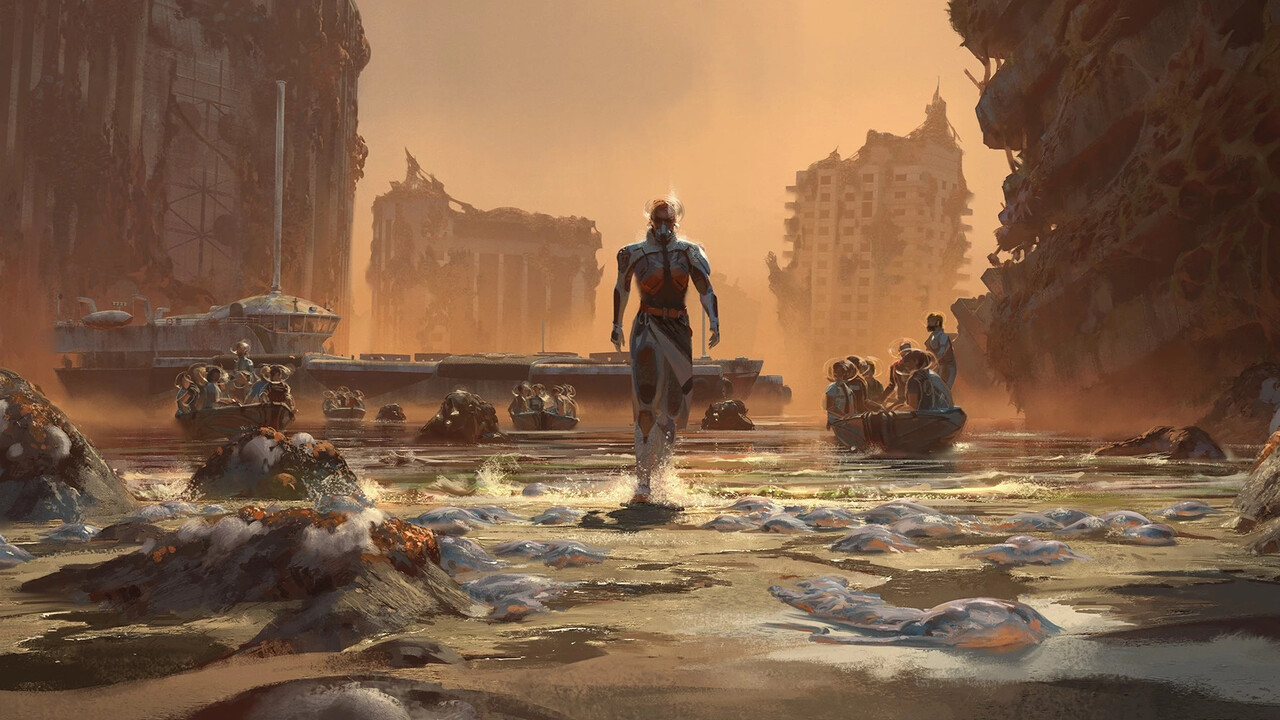 The two previous articles analyzed why we chose to create KIN – Mycocene as a biopunk narrative art book and followed the train of thought that laid the basis of the KIN universe. This article will introduce you to the tools and reflections that went into creating our story.

Why are Stories so Important?

A story is essentially a series of related events which taken together, create meaning.

Stories are found at every level of the human experience, starting from the most obvious, like the novels we read and the films we watch, to the scientific, religious, and political ideas we believe in and the daily experiences of our personal lives. Some will go as far as to say that our identities are, in fact, stories and that we cannot function without them.

Yet, in the 1990s, Japanese sociologist Shinji Miyadai theorized the end of the sense-making power of stories with his concept of "endless everyday" (終わりなき日常, owari-naki nichijō). By the beginning of the 1990s, the USSR had fallen, and the Japanese economic bubble burst. Miyadai then witnessed the loss of power of the two overarching narratives of the 20th century—communism and capitalism—in the minds of his fellow Japanese.

Dramatic events such as the Fukushima nuclear disaster of 2011 or the ongoing global pandemic of the early 2020s have certainly damaged our trust in other modern narratives, such as scientific progress and humanity's control over nature. The question is, now, what should we do when we lose the meaning of the world we live in and our desire for a better tomorrow?

Should we hone our communication skills to navigate the flow of an endless repetition of equally meaningless days—like Miyadai advocates? Or should we try to create other stories, more open, less overarching perhaps, on the ashes of the old ones and toward a future we could hope for?

We at Junglecrow Studio want to believe in the latter, so we decided to check on what master storytellers say about what makes good stories.

Stories and their Structures

We researched the science fiction stories we liked and the people behind them. George Lucas' Star Wars is probably one of the most successful tales of recent history. Some fans will be familiar with the theory that helped him build the foundations of his franchise: Joseph Campbell's work of comparative mythology, The Hero with a Thousand Faces (1949).

A hero ventures forth from the world of common day into a region of supernatural wonder: fabulous forces are there encountered and a decisive victory is won: the hero comes back from this mysterious adventure with the power to bestow boons on his fellow man.

— Joseph Campbell, The Hero with a Thousand Faces

For Campbell, this deep pattern underlies myths from all corners of the world, thus dubbing it the monomyth structure. Yet here quickly emerged another question. What if these stories that shaped humanity's action into the world are to blame for the ongoing destruction of our only home? And should we stick with them?

Speculative fiction author Ursula K. Le Guin had a clear opinion on the matter. She proposes an alternative to Campbell's stories of heroic victory in her short essay The Carrier Bag Theory of Fiction (1988).

It sometimes seems that that [heroic] story is approaching its end. Lest there be no more telling of stories at all, some of us […] think we'd better start telling another one, which maybe people can go with when the old one's finished. Maybe. The trouble is, we've all let ourselves become part of the killer story, and so we may get finished along with it. Hence it is with a certain feeling of urgency that I seek the nature, subject, words of the other story, the untold one, the life story.

— Donna J. Haraway, Staying with the Trouble: Making Kin in the Chthulucene

We have kept these precious insights in mind during the whole process of writing our first plot in KIN's universe. Yet, we still searched for a "tool" that would make our effort to tell this different kind of story easier as a group.

Over the years, Campbell's theory has been tweaked and adapted by many. Rick and Morty's Dan Harmon reworked it into an easily actionable 8-step template applicable at all the narrative scales, from the story arc of a character in a single TV episode to the structure of a whole drama series (1). It makes it more readily available to craft stories not only of all-conquering heroes but also of ordinary characters struggling in "the life story." And it was easy to make the process a collective effort between team members. 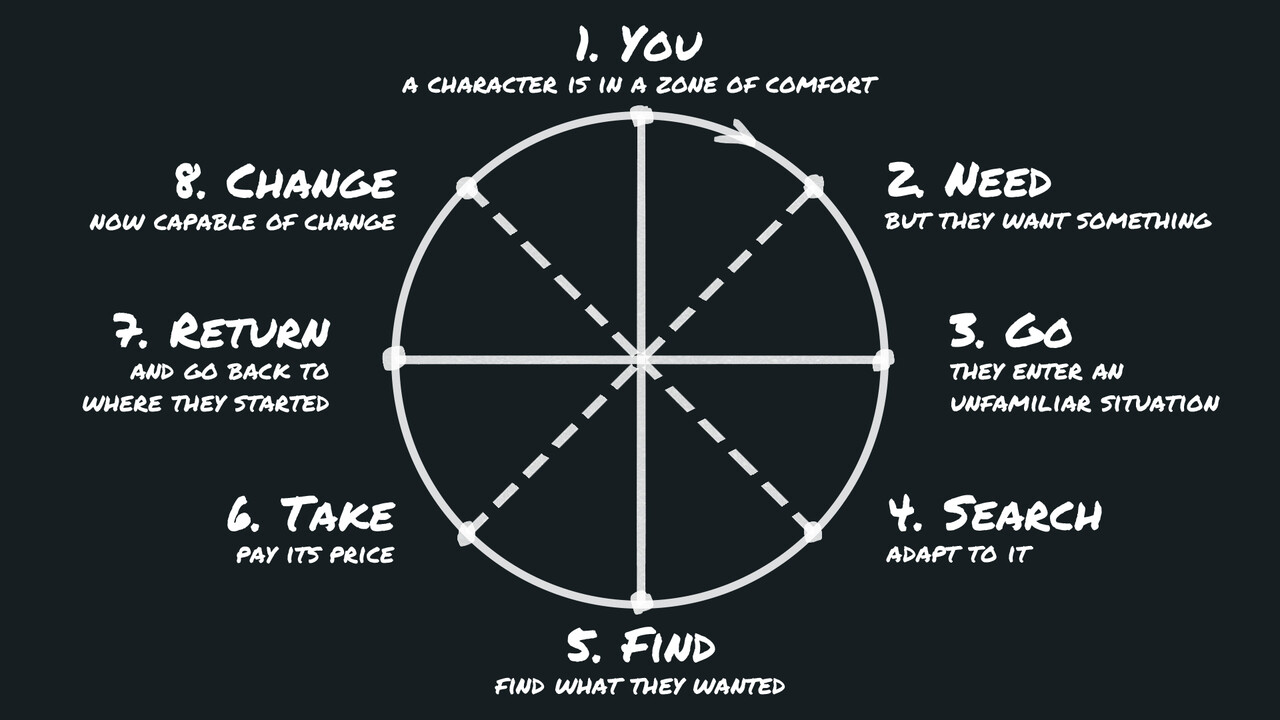 Now let's see how we used this template to flesh out the story of KIN – Mycocene.

With our themes and the world-building elements in mind, we started to apply the story embryo to the global story of the book. Repeating the simple 8 step sequence in different fashions in a short amount of time, we were able to quickly come up with a basic 8-chapter story structure with clear stakes.

Our whiteboard with the early structure of the first 4 chapters

Each stance we imagined could be interesting to explore within the story was attributed to a character. We then applied the template to the story arcs of what became our main protagonists. It helped us define their core motivations and transformations. They, in turn, could be injected into the global story to adapt and refine it and so on, repeating the cycle.

Recursively applying Harmon's technique on two scales, the overall plot and individual narrative arcs, permitted the fleshing out of interconnected and coherent storylines that, we hope, will prove to be a rooted and meaningful experience for our readers.

Once the story's main elements were in place, we had to find the best way to convey this story with our choice of the art book medium.

Words and images. These were the tools at our disposal to tell our story. How to use each one and play with their juxtaposition was an exciting challenge.

We quickly knew that we had to split up the narration between our different characters and ban third-person narration on the literary side. Using the first-person for each protagonist, the point of view of the narration never exceeds what each character knows and feels. It creates more empathy from the reader toward them. And rotating between the intimacy of multiple personalities going through situated experiences induces the reader to proactively develop links between them to generate the whole story's scope. This process, it appeared to us, would be a perfect way to tackle the theme of KIN—the interlinked essence of human beings between them and their environment—down to its very reading experience.

On the other hand, we chose to center the use of the equally crucial visual side of the book, the illustrations, on two things: the breadth and diversity of the KIN universe and the interactions between characters. The environment itself is a character of the story in its own right. We opted for the increasingly popular 2:1 aspect ratio, wide enough to give the world the space to unravel itself while still keeping the right amount of height to focus on characters when necessary.

To take advantage of both text and images in the narration, we settled on a complementary layout where every book spread contains a character's written point of view on one side and the key moment of the scene illustrated on the other. We tried to strike an equilibrium between the two. So as we worked on the story structure, we started to draw storyboards in parallel so that the visual elements of the art book engage their full potential in shaping the narration.

Storyboarding and Sharpening the Narrative

Klaus Pillon played a crucial role in the storyboarding step of the process. Together, we conceived multiple simple sketches for each spread of the story. We drew our inspiration mainly from the visual grammar of films, manga, and comics. Rapid iteration allowed us to explore graphical compositions with great liberty, often feeding back our visual discoveries and their implications into the narrative design.

To get a preview of the overall visual rhythm and arrangement between cuts, we used a Trello board. As we added new images, moving them around, changing angles, zooming in and out, we accomplished the bulk of the work over several weeks. It then allowed us to set up regular review meetings with friends and colleagues, inspired by the Pixar Braintrust (2). There, any participant gets a voice in the possible improvements of the narrative. 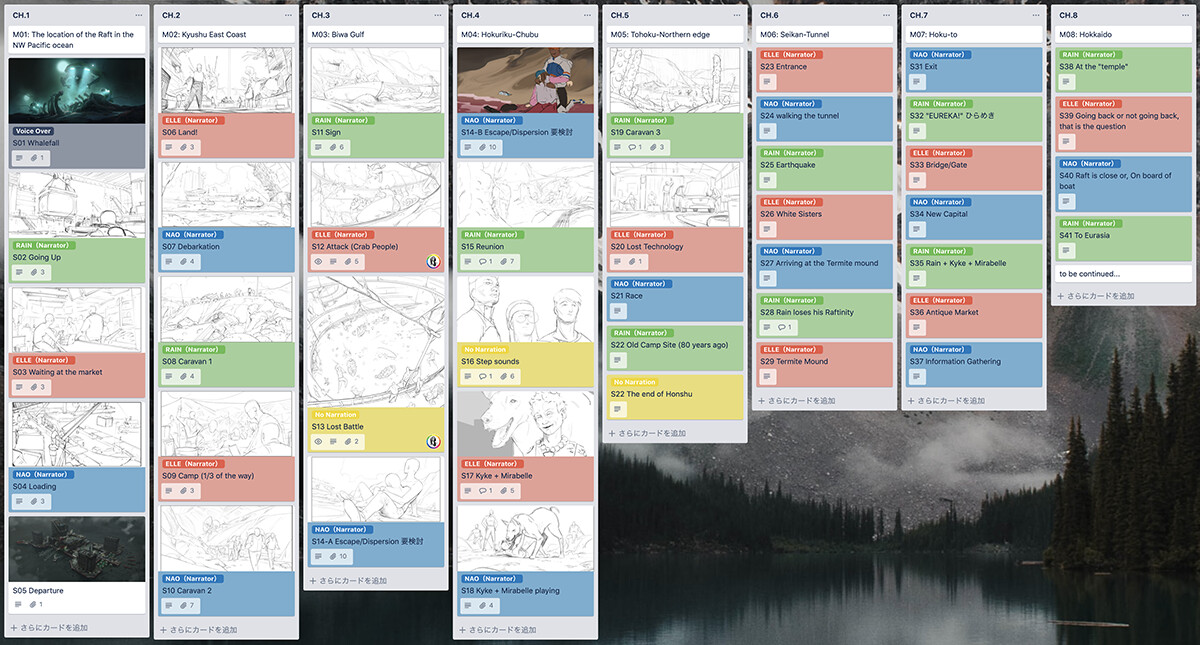 With a continuously evolving story, the final storyboard wasn't complete until almost the very end of production. Because we wanted to create the best narrative possible, we kept adjusting its elements over the two and a half years it took us to complete it.

After all this hard work of trial and error to shape a story that would resonate with the need for a shift in our consciousness towards the living world around us, we very much look forward to sharing KIN – Mycocene with you.

(2) Inside The Pixar Braintrust, Fast Company