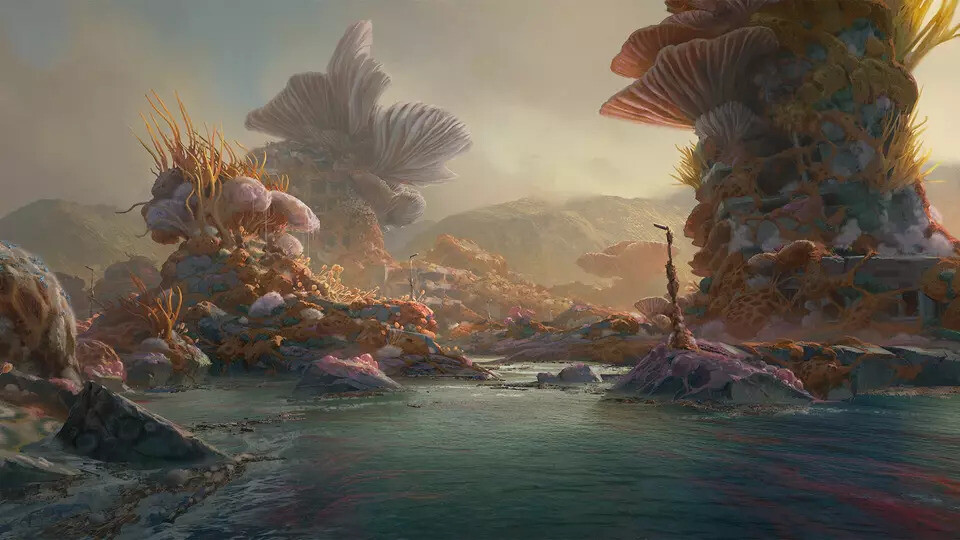 Our first article explained what led us to choose a biopunk-themed narrative art book as Junglecrow Studio’s first original creation. In this second opus, we dive into the ideas and the process we went through while world-building the universe of KIN – Mycocene.

Let’s get back to basics. According to Wikipedia, world-building is “the process of constructing an imaginary world [...] with coherent qualities such as a history, geography, and ecology.” It “involves the creation of maps, a backstory, a flora, a fauna, different peoples and their technology.” All exciting stuff. So how did we do it? The team regularly sat around a table in early 2019, at lunch or after work, with a whiteboard and a few color markers. And we started debating and writing down ideas.

One of the numerous whiteboards from the world-building process.

A universe, even an imaginary one, remains a place. Many SF works take place on planets far away, outside the Solar system even. However, with life and humanity’s position within it as a core concept, it quickly became obvious our story had no reason not to unravel on Earth. After all, it doesn’t mean it has to look familiar. As a Tokyo-based studio, we felt taking our story to a future version of Japan was as good a place as any other. All thee the more so if you consider the abundance of North-America based content already out there.

Then quickly came the question of time. Our idea was to imagine what could come in after a (post-)cyberpunk world. We considered the timelines of reference works such as the Blade Runner movies (set in 2019 and 2049, respectively) or the—then-upcoming—game Cyberpunk 2077. It meant we had to place our universe at least as far as by the end of the 21st century.

We could have chosen to depict the end of cyberpunk society. But we decided to give the Earth some more time to recover from whatever catastrophic event causing the all-technological humanity’s demise. We settled for the middle of the 22nd century, not too close but just far enough to imagine our descendants 4 or 5 generations down living with the consequences of today’s thermo-industrial civilization.

Addressing Climate Change and its Consequences

We tend to take today’s Earth for granted, yet we couldn’t avoid the question of anthropogenic climate change. Rising sea levels, hotter temperatures, more frequent natural disasters, plummeting biodiversity, you know the drill. Most of the literature we read for reference featured a version of planet Earth transformed by global warming. Take novels like Oryx and Crake (Margaret Atwood, 2003), The Windup Girl (Paolo Bacigalupi, 2009), or Autonomous (Annalee Newitz, 2017).

We thus decided to rely on the pre-existing knowledge of our future readers. Whatever comes after, we went full-on with the scope of predicted environmental consequences. Greenhouse gases emissions leading to hotter temperatures, ice caps melt, permafrost warms, and forests catch fire—causing more emissions. As the Earth’s ecosystem crosses tipping points, it sustains positive feedback loops that produce more instabilities. Up to what impacts on human society?

Imagining Japan in the latter half of the 21st century

Some scientists calculate that if we burn the remaining fossil fuels on our planet, sea levels could rise by 60 meters in the following 10 thousand years (1). For dramatic purposes, we temporarily imagined that unforeseen ecological reactions would accelerate the rise a hundredfold. We used floodmap.net’s modeling tool to appreciate shoreline changes. We decided to use our artistic license to finally settle on the graphical effect of a 200-meter increase. 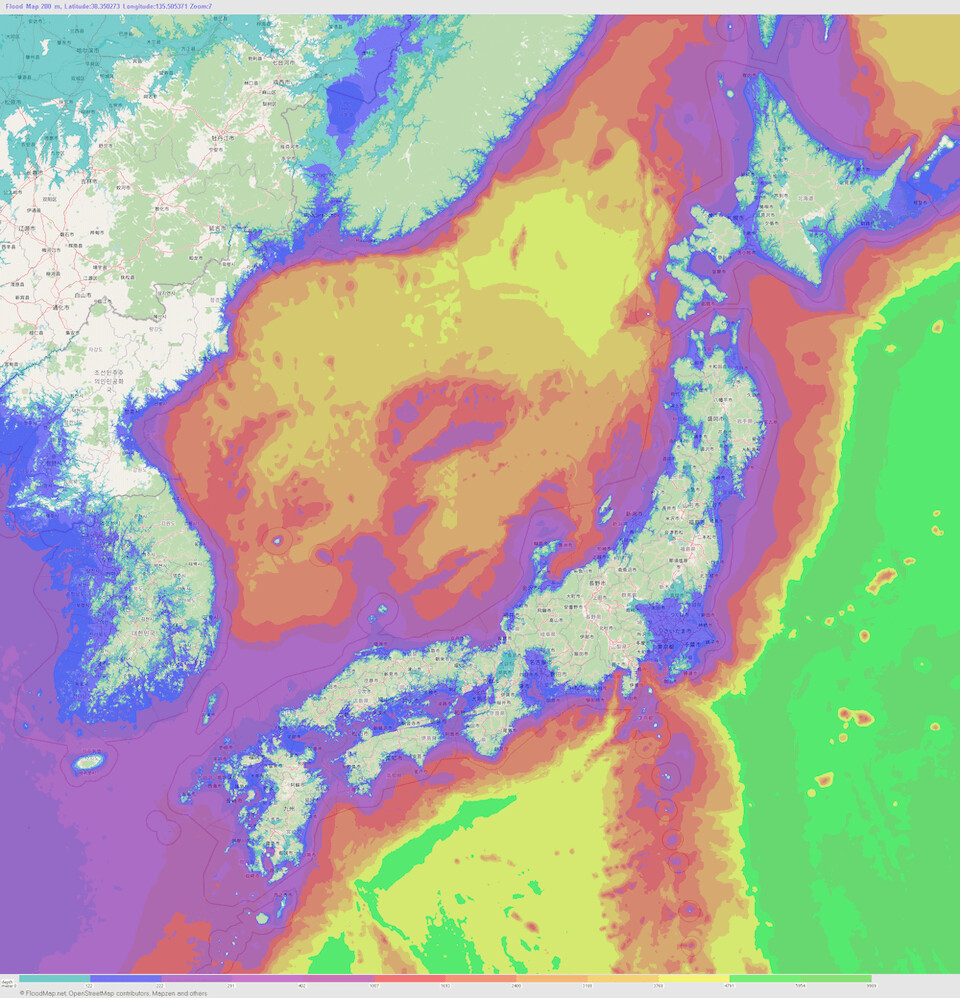 As you can see, major metropolitan areas like Tokyo and Osaka are well underwater. This implied imagining the construction of massive seawalls and the relocation of entire cities. Fast re-urbanization would call for the revival of the brutalist danchi architecture (2), not to mention a continuous influx of national and international refugees. 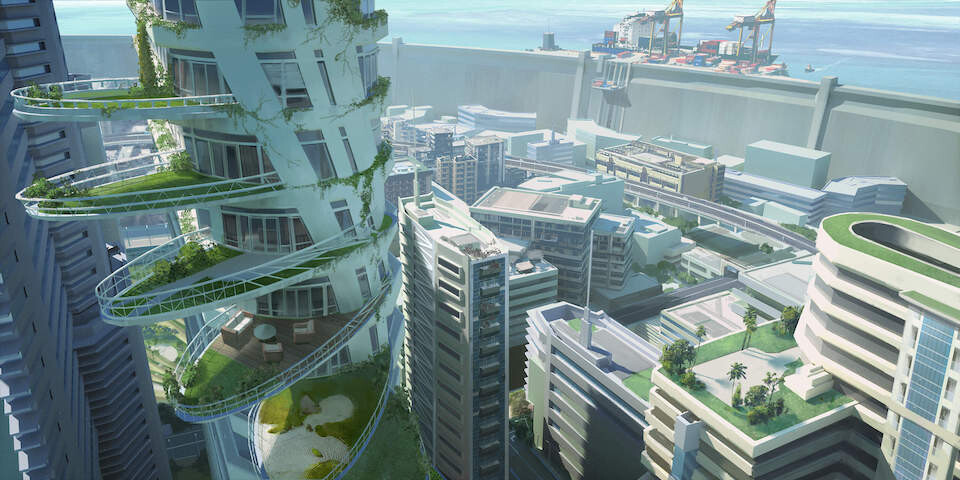 These radical transformations could very well topple current geopolitical entities, so we transitioned Japan into a federation of new semi-independent districts. All these backstory elements slowly constituted a backbone of shared references and images, all within the tropes of the cyberpunk society we wanted our world to fall heir to. Now was one thing left to do: imagine the most meaningful way to end it.

A New End for Civilization

[...] when a species exceeds the carrying capacity of its host environment, its food chains collapse and diseases emerge to devastate the population of the threatening organism.

This phrase is from American mycologist Paul Stamets. Some of you might already be familiar with his name through Star Trek: Discovery’s eponym character. His book Mycelium Running – How Mushrooms Can Help Save the World (2005) was instrumental in our coming up with our own way of causing an apocalypse.

Floods, nuclear bombs, zombies, and of course, plagues, our imagination is ripe with a plethora of human wiping catastrophes. We wanted something that would fit into the biopunk genre. We also tried to define it to cause a paradigm shift in our future characters’ lifestyles and environments.

With a hint from Stamets’ book, we stumbled upon a 2007 scientific paper describing a peculiar phenomenon. Fungi found inside and around the Chernobyl nuclear reactors in 1991 were “eating” radiations (3, 4). The concept of a mushroom feeding on a portion of the electromagnetic spectrum sprung a chain reaction of ideas between team members. On April 26, 2019, this resulted in the following definition of the KIN-kind of a pandemic.

After that, we went with Rotten Planet as the project’s internal working title.

Beyond The End: The KIN Universe

Now you probably have a better idea why the art book is titled KIN – Mycocene. After the Anthropocene, or the epoch of humans (Anthropos), comes the age of fungi and mushrooms (Myco-). We were comforted in the idea, knowing fungi had already ruled the planet at least twice in the past. This opened the field for crazy organic shapes in contrast with our backstory's man-made, hard-surfaced elements. And they would be covering an alien-looking Earth with some level of credibility.

With an estimated 5.1 million species—only a fraction described—fungi constitute the third kingdom besides plants and animals. Paul Stamets describes them as "the great recyclers of our planet," "the interface organisms between life and death." We shared a common ancestor with them more than 600 million years ago. And one of their most fascinating characteristics is their mycelium, an intricate web of filaments that Stamets dubs "the neurological network of nature." What better alien, nonhuman intelligence to imagine we could one day interact with? 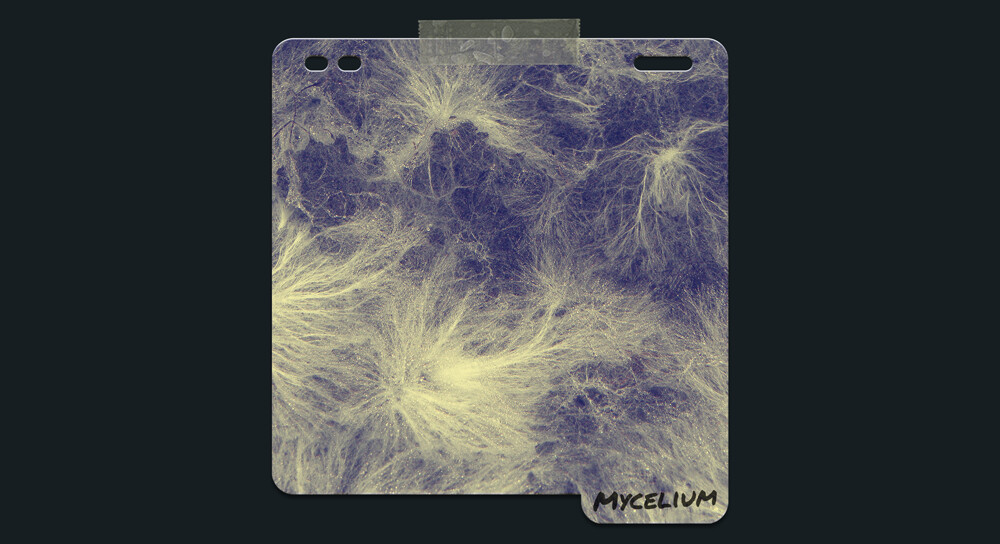 Many will point out that this resembles Hayao Miyazaki’s Nausicaä of the Valey of the Wind. We (re-)read the manga as we worked on the project, so yes. We definitely need more stories like his. And like Miyazaki, we had to keep a few humans around.

We located them on an ocean-borne refuge in international waters to cater to their need of escaping the pandemic. Some like Peter Thiel and his Seasteading Institute have already been toying with the idea (5). We nicknamed it the Raft. Themed as an independent biotech research facility, it gives our protagonists the tools to understand—and when needed to fend off or adapt to—Earth’s new biotopes in a perfect biopunk fashion. “Rafters” are the last remnants of a cyberpunk society but deprived of wireless means of communication. Fearing the radio wave eating fungi, they are back to using cables as a metaphor for the interlinked essence of human beings between them and their environment.

You might start to understand why we are calling this universe KIN. English readers will recognize that "kin" designates one's family and relations. If you pick up a Japanese-English dictionary, you will learn that "kin" (菌) also means mushroom in Japanese. It is used as an umbrella term standing for fungi, bacteria, and archaea. Blending both meanings, it seemed we had no choice but to go with it. Saying we built a universe based on a play on words between two languages would be a little far-fetched. Still, we think "KIN" shows pretty well the themes we put at the core of our world-building.

(3) Ionizing Radiation Changes the Electronic Properties of Melanin and Enhances the Growth of Melanized Fungi, PLoS ONE